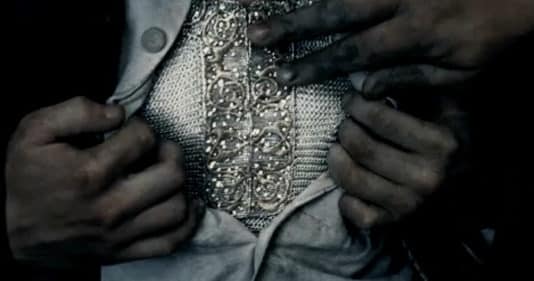 J.R.R Tolkien lived and died a Roman Catholic. He clearly had a solid understanding of God’s providence and moral absolutes and frequently exalted mercy over judgement in his writings. Yet despite this, he sadly left us vestiges of his Roman Catholicism within The Lord of The Rings that you need to be aware of.

The Lord of The Rings trilogy wasn’t just created in a vacuum for a bit of fanciful reading but was borne out of a detailed world and mythology of Tolkien’s own creation. Many things from Tolkien’s mythopoeic work The Silmarillion are referenced in The Lord of The Rings and one would not necessarily understand what the significance of such things are unless one was… well, a serious LOTR nerd who looked into it.

Throughout the books, Frodo frequently cries out to a spiritual being called “Elbereth”. This happens at the Weathertop where the Witch-King’s “Morgul blade” makes friends with Frodo’s chest and also at the Ford of Bruinen when being chased by the Black Riders.

So who is Elbereth? She is Queen of the Valar, beings who are basically angels in Tolkien’s world. The name Elbereth itself is Sindarin (elvish) which translates as “Star Queen”, or Queen of Heaven.

So Frodo, when in danger, evokes the Queen of Heaven to aid him in his distress.

This is significant when one understands how the Roman Catholic Church interprets Revelation 12:

“Now a great sign appeared in heaven: a woman clothed with the sun, with the moon under her feet, and on her head a garland of twelve stars. Then being with child, she cried out in labour and in pain to give birth.

And another sign appeared in heaven: behold, a great, fiery red dragon having seven heads and ten horns, and seven diadems on his heads. His tail drew a third of the stars of heaven and threw them to the earth. And the dragon stood before the woman who was ready to give birth, to devour her Child as soon as it was born.” The Revelation 12:1-4

Roman Catholic Theology would have us believe this is a reference to their perpetual virgin; Mary. This is why Roman Catholics refer to Mary as the Queen of Heaven. In reality, this is a symbol of the nation Israel, the 12 stars being a reference to Joseph’s brothers and his dream (Genesis 37:9). Stars are clearly used in Revelation 12 to represent spiritual principalities or authorities, notably the 12 tribes of Israel (Rev.12:1) and angelic beings (Rev 12:4). To call Mary the Queen of Heaven is to ascribe her authority over these things- #heresy

Big deal, you say. Roman Catholics have whack eschatology- anyone could tell you that, right? Well, it gets dark. You see, the Queen of Heaven is a figure that pops up regularly in pagan religion and mythology. She is known as Ishtar to the Babylonians, Astarte to the Semites, Aphrodite to the Greeks and Ashtoreth to the Sidonians.

She is even mentioned in this book called the Bible. In the Bible, however, she is not your pal and she is certainly not Mary the physical mother of Jesus Christ.

What was going down in the days of Jeremiah is that the people of Judah had made a vow to worship the Queen of Heaven:

“…we will certainly do whatever has gone out of our own mouth, to burn incense to the queen of heaven and pour out drink offerings to her” Jeremiah 44:17

And this is what God told Jeremiah to tell those folk:

“The incense that you burned in the cities of Judah and in the streets of Jerusalem, …the Lord could no longer bear it, …Because you have burned incense and because you have sinned against the Lord, and have not obeyed the voice of the Lord or walked in His law, in His statutes or in His testimonies, therefore this calamity has happened to you, as at this day.” Jeremiah 44:20-23

You see, the evoking of the Queen of Heaven brings God’s judgment and wrath, not protection from ills. This is a massive problem in The Lord of The Rings trilogy. Frodo will need something stronger than Mithril to protect himself from God’s Wrath.

One Does Not Simply Make Disciples

With this knowledge in hand, you can now emblaze the interests of nerds like Sting at a Mordor man-flesh banquet and have a Gospel conversation that is more riveting than the Council of Elrond.

I’m just going to make this short and blunt. This article is horse shit.

Thanks. I was going to say exactly the same, although in a less polite fashion.

Looks like this “clergy person” has never read 1 Timothy 3:2 😁

Looks like you have never read 1 Corinthians 13:4
(Although I must give you credit for knowing how to add covered hyperlinks and emoticons in these comments. 🙂 FWIW: https://www.blueletterbible.org/nkjv/1co/13/4/s_1075004)

Ah. Looks like emoticons “self-generate” their icon form from the original text such that 🙂 is created from : – ) (sans spaces, which I could have avoided if I knew how to escape the space-less form). Sorry, what were… Read more »

The so-called Queen of Heaven, with the regional name-variations Ishtar, Astarte, Ashtoreth, and perhaps a few others, was a bogus, knock-off, mini-deity from polytheism. She was either a demon pretending to be her, a false god emerging from the fallen… Read more »

If this reasoning followed that would mean Joseph is the king, not Jesus. Notice how Mary is never called the Queen of Heaven in the scriptures. The RCC having amalgimted pagn feasts with Christianity (Easter, Christmas etc) have also adopted… Read more »

I was excited to see a theology-and-nerddom article pop-up, but this is just offensively anti-Catholic, and a surface-level, bad faith examination of the source material (Scripture, Roman Catholic tradition, and Tolkien’s works) at best. Moreover, the piece purports that the… Read more »

If you think Roman Catholicism is supposed heresy you have bigger problems than citations about the Queen of Heaven :/

Why did you learn theology in secular programs? That’s like getting driving lessons from the blind lol

So let me get this straight: – Revelation 12 describes the Queen of Heaven giving birth to Jesus, an image that has been understood to either refer to Mary (literally) or Israel / the Church (metaphorically), or both. – It’s… Read more »

Notice how Rev 12 does not mention the term “Queen of Heaven”, are you perhaps reading that into the text?

Do you agree that there is only one way to God, and only one mediator between God and men?

You might want to think about how in the days of the Kings of Israel, the Queen was not one of the King’s wife, it was the King’s mother. Let’s take Solomon for an example. He had scores of wives… Read more »

Hi Ken, I’ve never heard this line of thinking before, so thanks for bringing it to my attention! I guess we have to consider if the account in Kings is descriptive or prescriptive. Solomon also amassed horses and wives which… Read more »

Solomon was indeed instructed not to have too many wives, but is not through the line of Solomon–born of David’s murderous and adulterous affair with Bathsheeba–that our Lord entered humanity? Jesus is a Son of David, his full heir to… Read more »