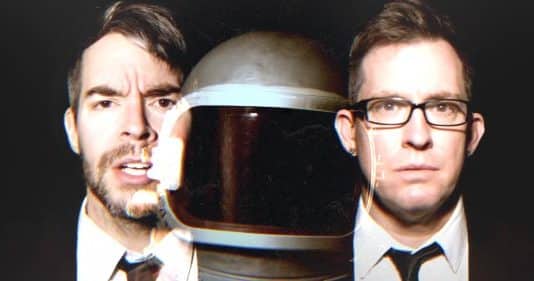 Lead guitarist of Chevelle, Pete Loeffler has established a lyrical style of sarcastic, poetic ambiguity with methodic rhythms that are sharply interrupted by aggressive sonics.

It is Pete’s intention for Chevelle’s music to stir emotions while leaving room for listeners to deconstruct the lyrics and apply the self-constructed meaning to their lives.

“A big part of it is that we write everything ourselves and never let anyone else write anything.” – Chevelle

This post-modern philosophy of songwriting works well in a pluralist society where everyone keeps to themselves and gets along. However, this does not hold weight in the face of polarising political, religious, and sociological issues, such as the vaccine debate.

Pete departs from his own songwriting philosophy in Self Destructor, which reached #1 on the Billboard Mainstream Rock charts.

A clear line is drawn in the sand where those who question vaccines are at war with everyone, going as far as to imply that millions are dying from such anti-science practices.

Interestingly, Self Destructor was penned before Covid-19, (much likes Tool’s Fear Inoculum), in which the band’s drummer Sam specifically says the song is about anti-vaxers.

They Don’t Care What The Science Says

Ironically, Sam Loeffler embraces the Niche philosophy of Nihilianism, which stipulates that there is no objective truth. It is the Nihilist that certainly denies certainty, and is indifferent to demonstrable scientific conclusions.

This anti-science sentiment is jointly expressed around vaccines by both Sam and Pete who admit that they would take any injection without question as long as they can play live gigs again and start touring.

“Just give me the vaccine if I can go play something. Give it to me, give me two of them. I’ll take one in each arm and I’ll carry one in my pocked and carry it around if you want me to. I just want to go to work.” – Sam Loeffler (Source)

“If somebody called me and said ‘come out and get it’, I would get into my car and go. Anything to start the process to getting back to normal.” – Pete Loeffler (Source)

Sadly, Chevelle, like many others, has embraced and is knowingly or unknowingly promoting a new world religion called scientism.

The monopolisation of scientific thought and the contempt towards those who question “established” doctrine is evidence of this.

The term “science says” makes no sense because science cannot speak, and stating so is to attribute human characteristics to an abstraction which is a reification of terms. It would be like your accountant saying “You’re bankrupt, but it’s not your fault, it’s mathematics that is to blame!” Science, like mathematics, is a tool used to form conclusions that are either true or false (deduction), or strong or weak (induction).

The field of science has no dogma. The mantra of “trust the science” is itself an anti-science proposition. If the prevailing scientific paradigm is never questioned, scrutinised, or examined, then it becomes stagnant and hinders progression.

For example, if Galileo trusted the science of his day, he would have not so zealously sought to prove heliocentrism.

The agreement with or disapproval of vaccines can’t be narrowly segmented into a “for or against” dilemma. The subject is nuanced with each vaccine, schedule, and patient, requiring a case-by-case examination.

Therefore, the concept of demonstratable truth (which Nihilianism denies) and informed consent (which Pete and Sam are indifferent to) is essential to a worldview that can make true science intelligible.

The Men In Black

Self Destructor is listed on Chevelle’s 9th album Niratias, which is an acronym for “Nothing Is Real And This Is A Simulation“. The album highlights themes such as space exploration, alien encounters, and environmentalism.

The music video features both Pete and Sam dressed as the “men in black”. They locate an astronaut seeking to hide an alien artifact in a forest. Once Pete and Sam make physical contact with the artifact they are transported to another dimension, where, upon returning to earth, the astronaut is dead and unable to complete the concealment of the artifact.

The term “men in black” was coined by John A Keel, a UFO researcher. When commenting on the study of this phenomenon, he stated:

“I do not feel the aliens are from other planets, but I believe we are dealing with the Devil, fallen angels and his demons. These evil spirits have been with us as long as recorded history and use deception, trickery, stunts, to make us think they are alien.“ (Source)

When describing the men in black he concluded:

“The Devil’s emissaries of yesteryear have been replaced by the mysterious “men in black”. The quasi-angels of Biblical times have become magnificent spacemen. The demons, devils and false angels were recognized as liars and plunderers by early man.” -John A. Keel, Operation Trojan Horse, p193.

This is particularly poignant since Keel did not confess the Christian faith.

Mars Simula, Chevelle’s subsequent music video on the album, includes a reference to Arthur C. Clarke and Stanley Kurbick’s 2001: A Space Odyssey moon Monolith. Within the book series, the Monolith represents an alien artifact that grants scientific knowledge and activates a portal through which protagonist David Bowman enters and spiritually evolves to a point where he is able to thwart God’s universal judgment.

William Cooper in his Mystery Babylon series explains the Masonic or Lucafarican philosophy that is embedded in the original film.

Likewise, Self Destructor ends with a piano outro inspired by Faith No More, Epic which peddles Luciferian imagery and ideas in its music video and lyrical composition:

Is it possible that Pete and Sam have knowingly or unknowingly embraced doctrines of devils and are promoting sentiments that transcend space, time, and matter?

A characteristic specifically applicable to the latter days:

“Now the Spirit speaketh expressly, that in the latter times some shall depart from the faith, giving heed to seducing spirits, and doctrines of devils.“ -1 Timothy 4:1

Scientism And The Occult

“There are two equal and opposite errors into which our race can fall about the devils. One is to disbelieve in their existence. The other is to believe and to feel an excessive an unhealthy interest in them. They themselves are equally pleas by both errors and hail a materialist or a magician with the same delight.”

Are we being prepared for an alien encounter by forces that require the adoption of scientism to achieve their universal aims?

Aims that will unite both the materialist and the magician?

Read next – Thought Covid-19 Was Nuts? Wait Till Politicians Start Talking About Aliens