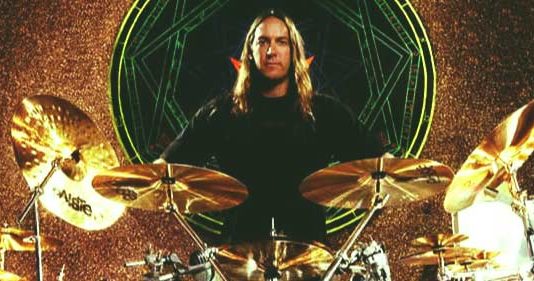 Tool drummer Danny Carey believes that he can summon demons to do his will by practising ritual Magick through trance-like drum patterns.

Danny Carey wrote the forward to a 2009 book titled “The Wickedest Books in the World: Confessions of an Aleister Crowley Bibliophile”. This volume is a collection of writings of the British wizard, occultist and inventor of Magick; Aleister Crowley. Symbols of Crowley’s Golden Dawn cult and other Masonic imagery features on Danny’s website. Danny also sells a t-shirt of a Crowley quote.

Danny Carey’s Father Was A Freemason

This bio was listed on the official Tool website at one time but was removed. Web Archive still allows users to see the old site. Many other websites, blogs and interviews also reference this fact as we will come to see.

“…an element of mystery was added to Danny’s childhood when one day he spied his father with a large sword conducting a Masonic ritual…Despite not becoming a Mason or aligning himself with any other school of religion, Danny has maintained his heritages [sic] interest in occult studies.” (Source)

Some Tool fans have argued that this is simply a joke and a bit of edgy marketing to emphasise the mystic and darkness of the Tool brand. This type of thinking would be reasonable if it were not for the band’s frequent references to occultic ideas, symbols, imagery and writers.

Danny himself has also confirmed this fact about his father in a 2019 interview:

“I think it was my dad. He was a master [sic] Mason and all this stuff, so he was always into the Freemasonic writings. We always had it around the house, and I was always fascinated with it. I was attracted to it, so I just went for it. He didn’t do anything to hide it from me by any means. He helped push me that way, which I’m really indebted for.” (Source)

“…Danny then set up his drums into proportions utilising the circle and square of the New Jerusalem and uttered a short prayer relating to the principles of the ace of swords from the book of Thoth. He then performed a ritual utilising his new found [sic] knowledge of the unicursal hexagram to generate a pattern of movement in space relating to Fuller’s vector equilibrium model. The resulting rhythm and gateway summoned a daemon he has contained within “the Lodge” that has been delivering short parables similar to passages within the Book of Lies.”(Source)

The unicursal hexagram was the symbol of Crowley’s Golden Dawn order. Danny’s drum skins feature such occultic symbols and patterns.

A 2001 Pulse magazine interview, Danny described the Tool recording studio in this manner:

“A huge geometric grid covers the ceiling, which is also decorated with gargoyles and skulls. Two 100-year-old swords once used by Carey’s father in Masonic rites adorn a wall, with more geometric patterns, a mace, an occult library with umpteen first-edition Aleister Crowley books… an enormous “Enochian magic board” inscribed with the names of various angels and used to channel spirits is lodged behind Carey’s drums.” (Source)

Enochian is a demonic language that was promoted by Walsh occultist John Dee and an automatic writer called Edward Kelley. Here is an example of Danny drumming behind a Magick board.

Danny describes the recording process with this Magick board in a 2001 interview with ModernDrummer:

“We try to take advantage of every tool available. We’ll use whatever it takes to get the best recording we can to get us in the optimum position to make music.” (Source)

Danny believes this board is evocative and serves a purpose in Tool’s production process.

Tool Concerts Are A Summons, Not A Show

Danny describes the process of channelling demons while drumming:

“Every number has its strike on the subconscious in one way or another…The more you can make yourself sensitive to these things, the more it can open you up to other forces that may want to be heard. It’s my job to get my ego out of the way enough to be sensitive to these things and let them flow through me. I’ve always been fascinated with sacred geometry—those are some of the shapes I’ve drawn on the Simmons pads. It’s about tracing the manifestation of matter into the physical world.” (Source)

Danny describes that his drumming is a tool to connect listeners with demons.

“When people come to see us, I want [sic] make it as much of a ritualistic experience as possible…Some beats suck people in.” (Source)

The ritual Danny is speaking of here is an Alester Crowley-inspired routine to summon spirits.

Does It Really Work Though?

According to the Bible, occultic forces are real and legitimate. The Egyptian magicians Jannes and Jambres (2 Timothy 3:8) who resisted Moses were able to replicate three different miracles (See Exodus 7-8). The Prophets of Baal shed blood (as did Crowley in his rituals) when resisting Elijah and were surprised and confused when their invocations were not answered (1 Kings 18:20-40). The man possessed by the demons known as Legion had supernatural strength and could not be bound with chains (Mark 5:1-20). The demon-possessed slave girl in Acts made her masters much profit from being able to tell future events (Acts 16:16-19).

It is no surprise then that Tool’s 2019 August album “Fear Inoculum” was preceded by the worldwide fear of COVID-19 that has been used by governments to justify forced lockdowns. The lyrics of this song specifically reference a being called “the deceiver” advising the listener to “fear the breath”.

“The deceiver says, he says
‘You belong to me
You don’t wanna breathe the light of the others
Fear the light, fear the breath
Fear the others for eternity'” (Source)

Danny, in a 2020 interview, stated that he was looking forward to a universal vaccine or inoculum to combat Covid-19. (Source)

The Spirit Of God

One fascinating feature of demons who encounter Jesus in the gospels is that they are always terrified of Christ and plead for mercy (Mark 5:7).

The demons know their end; a lake of fire (Matthew 25:41). Knowing this, they tremble (James 2:19), and so should all who align themselves with seducing spirits and doctrines of demons.

According to the scriptures, all who are truly born again are indwelt with a Spirit (1 Corinthians 3:16). This is the Spirit of God who animates the Christian to do good works (Galatians 5:22-23) and worship God in a way that is pleasing to Him (John 4:24).

Such good works include the drumming of Jonathan Thomas of Ascend The Hill.

I loved Tool, it was one of my favourite bands. I am so grateful God has revealed this to me now. I still love the instrumentals, it’s quite unique, but I’m not going to listen to them again. Any suggestions… Read more »

I came to the same conviction after writing this. Ascend the Hill is comparable.

Thanks so much Zo, I’ll definitely check them out. Thanks for publishing these wonderful articles, love what you’re doing and what God is doing through these articles!

Thanks for the encouragement 🙂 Sometimes it seems like they are going out into the void, but we trust that God can use them however He pleases!

How They Have Been Brainwashing You Through Pop-Culture & Video Games