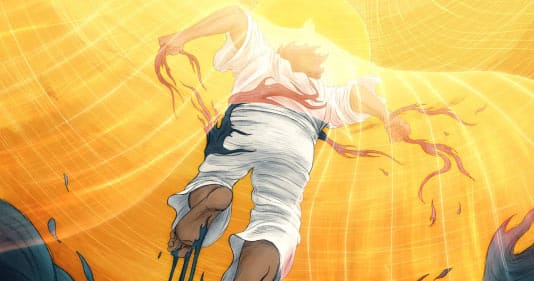 One thing I like about your work is the sensitivity with which you depict God and Christ. There are disagreements with the application of the second commandment within conservative evangelical traditions. Why do you think this is the case?

Yes, understanding and applying what is typically called the second commandment (though, not all Christian numbering of the commandments makes the idolatry commandment its own numbered commandment) is–obviously–a big deal for me. Until I started Full of Eyes, I actually had no idea that there were Christians who opposed pictures of Jesus (I knew pictures of the Father were suspect). So, back in 2014 when I stepped into this ministry as my actual “day job,” I knew that I needed to dig into the issues surrounding this disagreement and come to a place where I could act “from faith” as Paul calls us to do in Romans 14:23.

If you don’t mind, rather than speaking to why this disagreement exists, I’ll just share some of my thoughts regarding the issue of how to make and use images of Christ. My first book, Visual Exegesis Vol.I, has an appendix in it that deals with these things a bit more closely, but I’ll just briefly touch on them here. First, five reasons I think it is alright to depict images of Jesus (though I would still not be comfortable with images intended to represent the Father), and then an explanation of how I hope for these images to be used.

So, first–why is it legitimate to make pictures of Jesus when there is a command that says, “you shall not make for yourself a carved image…you shall not bow down to them or serve them”? Five reasons:

First, in both instances of this command (Ex.20:-6, Deut 5:8-10), the object prohibited is a “carved/graven” image, and that is a technical term used only for cultic objects of worship. So, what is being prohibited is not any visual depiction, but an object made to be worshiped.

Second, and this goes with the first point, what is prohibited is worship, this prohibition does not speak one way or the other to uses of images other than worship.

Third, in Deut.4:19, God warns against “bowing down to” or “serving” the sun, moon, and stars. This is the same language used in the prohibition against images. However, in Psalm 8:3-4, 19:1-2, Isaiah 40:12, and other places, Scripture encourages us to look at the sun, moon, and stars and–seeing them–be moved to worship God. So, we have Biblical warrant to say that there are things which God prohibits us from worshiping, and yet encourages us to look at in order to be taught about, and so moved to worship, Him. This opens up a conceptual space for an image (which would be idolatrous to worship) to be looked at and used as a teaching aid to move us to worship the one true God of whom that image (like the stars) speaks.

Fourth, the intention with which something is done matters. This is a point Martin Luther uses when defending the use of images for teaching. In Deut. 12:13-14, God says not to offer sacrifices anywhere other than at the Tabernacle. In Joshua 22:10, two tribes create a giant altar other than the one at the Tabernacle. This would seem to be disobedience, but they explain that this altar is a memorial to remind them of God’s faithfulness (Josh 22:26-27), in which case it is acceptable. So, an image that would be idolatrous if intended for and used as an object of worship, may be acceptable if intended for and used as a means of pointing us to the One whom we are to worship.

Fifth, finally, and most importantly, the God wrapped in the obscuring veil of smoke and fire of Sinai (Deut 4:15), has now manifested Himself in the revelatory veil of flesh and blood (John 1:14). The Word–who IS and so perfectly EXEGETES God (John 1:18)–has appeared in the body before the eyes of His people so that, in His human flesh, “we have seen His glory.” The fact that God the Son has become a man (and so is able to be–indeed, must be–visually represented as a man) is not an incidental or dangerous side-effect of the incarnation; God-revealed-as-man (as crucified and risen man) is not something He intends for us to forget. God really took on created, physical, visible form, and just like any other created, physical, visible form, He can now be depicted visually. And while, just like any other created, physical, visible form, it would be idolatry to worship a depiction of this form, we can–and I’d argue ought to–depict God in Christ as the slain and risen man and learn from those depictions about the utterly unique, cruciform splendor of the One whom we are to worship.

Finally, let me say a word about how I intend the images I create to be used. As you alluded to, I try to keep my depictions of Christ fairly highly stylized. This is intentional. I do not want to impose my idea of what Jesus “looks like” onto those who receive my work, rather, I want the depictions of Jesus that I create to be almost “visual words,” or “pictorial declarations” of the Gospel….I want the depictions to remain conceptual so that people can receive them and learn from them without being distracted about whether or not Jesus looked this way etc.

There’s more to say on this topic–lots more!–but I think that’s quite long enough for now!