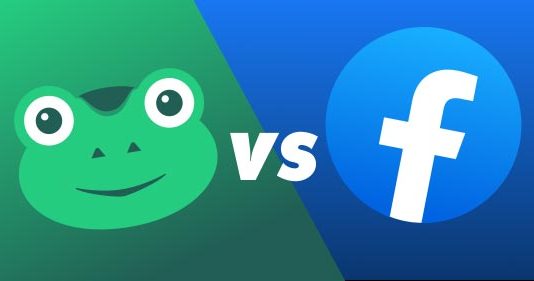 Gab Ads are currently not a replacement for Facebook ads, however, they could possibly be profitable if one seeks to sell a general-purpose item that resonates with a politically conservative demographic.

Facebook is innovating in ways that is harming advertisers, leaving an open door for a competitor to step in. Gab needs to focus on optimizing its ad delivery and profitability for advertisers before continuing other developments if this transition from Facebook to Gab is to be advantageous for small businesses.

Doing A Side By Side Comparison of Gab Ads & Facebook Ads

How effective would each platform be at encouraging Christian nerds (a very niche demographic) to join the TheoNerds mailing list to receive articles and podcasts?

The goal was to get the lowest cost per email sign-up/lead (CPL) using identical budgets, ads, and landing pages. The only difference would be the respective advertising platforms.

Two landing pages were created, one exclusively for Facebook ad traffic and the other for Gab ad traffic. Submitted emails were tagged in the backend to independently verify the legitimacy of submissions.

For the purposes of this test, a throwaway landing page on a new domain was set up so that a Facebook pixel could be utilized (we don’t use Google or Facebook spyware on Theonerds.net).

Both Facebook and Gab charge users per ad impression which is the display of an ad on a screen (CPM – Cost Per 1000 Impressions). Bots or fake accounts, which illegitimately load ads and count as impressions, can therefore quickly obliterate one’s ad spend on each platform.

By excluding everyone who had ever visited the landing page in the Facebook campaign, multiple fake/bot clicks can be deterred, meaning that bots can only click through to an ad once and will therefore never see the ad again on Facebook. It also ensures that Facebook is constantly seeking new people to show ads to.

Gab uninformatively lacks such features to mitigate bots (which is a huge problem on the platform). Therefore when running Gab ad campaigns it would be advantageous to only target mobile devices. This method assumes that the process of running bots via mobile devices or faking mobile devices would be a greater challenge for bad actors, therefore ensuring that mobile traffic would have a higher likelihood of legitimacy.

Both landing pages had double opt-in features and a CAPA system to prevent fake email submissions.

As this side-by-side test was started, Facebook rolled out its update on ad targeting. This update removed the ability for anyone to target or exclude individuals with direct interests in religious or political subjects (You can still target some religious interests, however, such as Richard Dawkins’ Foundation for Reason and Science which espouses the religion of scientism).

This is particularly challenging as our test sought to target Christian nerds to join an email list.

By targeting Christian films like “Amazing Grace” and “The Passion of The Christ” this demographic can be indirectly reached.

Such broad targeting meant that ads were being displayed to people who are not Christian, who responded negatively to the messaging which in turn drove up the CPM on Facebook.

Unlike Facebook, Gab lacks such algorithmic social credit systems on the news feed. The advantage of this is that your news feed is not being manipulated by a shadowy big tech agenda. The disadvantage is that this tends to leave quality posts buried among spam and low-quality posts, resulting in little-to-no post engagement on the site.

This has resulted in the power of the magnificent “repost” on Gab.

Individuals with large follows garner huge control of what is popularised on the platform.

Businesses, therefore, seek to leverage the CEO of Gab, Andrew Torbas’ “repost” which syndicates their messaging to his entire following of 3.5 million people.

This has led to a culture of Gab flattery on the site, where businesses leverage this as a means to market themselves. This was particularly true when Gab Ads was in beta and only open to a select number of businesses. Andrew Torba was seeking to promote and excite prospects of the new endeavor and would often repost praise about Gab Ads.

None of these praise posts include any real data like CPMs, Cost Per Clicks (CPC), or Return On Ad Spend (ROAS), however.

To combat this, the data shared below are all the important details of both campaigns, warts and all.

Making Sense Of The Results

The cost per impression was nearly 20 times cheaper on Gab than on Facebook, however, the ad click-through rate on Facebook was four times better than that on Gab. Traffic coming from the Facebook ads was 5 times more effective in getting email sign-ups compared to Gab. This substantial discrepancy is most likely due to the prevalence of bots and fake accounts on Gab.

The Facebook cost-per-lead was nearly half the price of that on Gab even though the campaign was hindered by a ridiculously high CPM without being able to directly target key Christian interests, something of which most advertisers will not have to face.

Gab is definitely a platform that businesses and creators should be leveraging. As for using their paid advertising, it would be best to hold off till this is further developed to maximize the profitability of your campaigns. It possibly would be more profitable to partner with a Gab influencer than use Gab Ads to promote your products or services.

If you have any questions about this or digital advertising in general I’ll answer them here in the comments!

Hi..I am An Affiliate marketer, Can I Use Gab Ads To Promote Goldco? Do You Think It Would Be effective?

We are a Faith based precious metals company looking for Affiliates like yourself. Please feel free to contact me directly to discuss our affiliate program and how we compare.

Ya I’m sure you can and won’t run into any issues however I don’t believe it will be effective. After writing this review I’ve run more campaigns and concluded that Gab Ads are so bad that they are practically a… Read more »