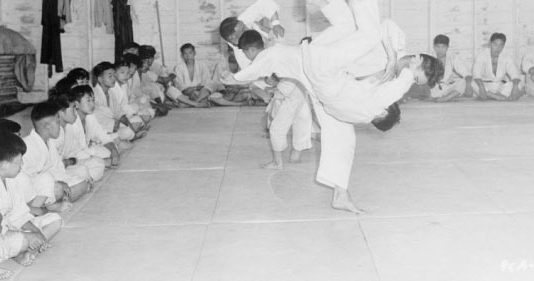 Brazilian Jiu-Jitsu has become popular among many conservative evangelicals, with most notably Voddie Bauchum being an outspoken proponent of the practice who also runs his own BJJ school in Zambia.

Even Christian podcasts have been developed around BJJ. With the growth in popularity of BJJ, there is a dark and dirty history of which Christians need to be aware.

Before we dive in, though, I want to make it clear that there is nothing wrong with exercise. BJJ can be a legitimate way to strengthen your body, have some fun and keep healthy. However, as with any hobby, lines can be crossed. The Christian must always be vigilant not to allow our entertainments to become a source of dissipation, idolatry or blasphemy.

It is also worth noting that I grew up playing Tekken and watching martial arts films. These inspired me to take up Taekwon-Do (ITF), where I trained extensively and competed in tournaments. As a teenager, I was instrumental in leading secular friends into martial arts (which I regret), who took it further than me and now compete in BJJ tournaments themselves as adults. I was familiar with the dark history of BJJ before it became mainstream in Christian circles. I used to be heavily involved in this sub-culture and I understand the mentality of this community.

My prayer is that you would consider this dark history and compare the motivations and practices of BJJ with scripture.

With that in mind, let’s get into this:

What is Brazilian Jiu-Jitsu?

Jiu-Jitsu is a precursor version of Judo having it’s origins in Japan. Many martial arts such as Jiu-Jitsu have their roots in the military. These systems of fighting were designed to kill people without the use of weapons. They have not been developed with sport, personal fitness or self-defence in mind. In many instances, the original methods and technics of martial arts have been modified or ignored to incorporate them as modern-day competitive sports. The Olympic sport WT Taekwon-Do is an example of this.

Jiu-Jitsu is a style of fighting that focuses on ground combat. Chokes, holds and locks are emphasised instead of strikes or kicks that would be seen in other fighting styles such as Karate.

Jiu-Jitsu was brought to Brazil through Judo schools in the 1920s and modified to be more aggressive in what we know today as Brazilian Jiu-Jitsu.

Vale Tudo is a private Brazilian full-contact tournament that involves little-to-no rules. Vale Tudo in Portuguese means “anything goes”. These fights are bloody, graphic and brutal. They are held privately in dojos that are won when an opponent submits or is beaten unconscious. It is in these underground fighting events that Brazillian Jiu-Jitsu was forged.

A manoeuvre known as the Kimura Lock was coined in 1951 when a Japanese fighter by the name of Masahiko Kimura broke the arm of a Brazilian Jiu-Jitsu fighter called Helio Gracie in a Vale Tudo fight. (Source)

Helio Gracie was part of a family that ran Jiu-Jitsu fighting clubs. To prove the prowess of their fighting style (BJJ), they challenged other martial artists to underground Vale Tudo matches.

This family tradition was then brought to the USA by Rorion Gracie who promoted Brazillian Jiu-Jitsu in California while working as a fight coordinator in Hollywood throughout the late 80s and early 90s.

These fights were recorded on VHS and as a collection have been called the Gracie Challenge Matches. Some of these fights have been made public but are hard to find online due to their graphic nature. Others are private, probably because they are too graphic to showcase. They usually display a member of the Gracie family taking on and dominating a larger opponent.

Rorion Gracie would later produce a no-rules, no-time-limit tournament that was televised later as the Ultimate Fighting Championship (UFC), a Mixed Martial Arts (MMA) event designed to show the strengths of BJJ publically.

The UFC today may have more rules and structure in place than its early days; however, many have died participating in similar MMA tournaments (Source).

Rorion Gracie was later sought out by the US government to develop a fighting course and train US Special Operations Forces, regular US military units, and the CIA.

The scriptures are clear about violence:

“The Lord tests the righteous, But the wicked and the one who loves violence His soul hates.” -Psalm 11:5

They are also clear about what must be done with those who intentionally or unintentionally shed men’s blood:

“Whoever sheds man’s blood, By man his blood shall be shed; For in the image of God He made man.” -Genesis 9:6

The danger of competitive BJJ and MMA tournaments is that they glorify things God hates and promote a faulty view of masculinity; one in which aggression, self-reliance and perverted justice are exemplified.

God did not design the body to undergo these types of activities. This is demonstrated through the phenomenon of cauliflower ear, joint problems, short-term memory loss, among others, that are all the result of prolonged exposure to these practices.

The scriptures say that a soft answer turns away wrath (Proverbs 15:1), not grapples and holds. Men who demonstrate Christ-likeness disperse threats through reason (Matthew 26:55) and flight (Luke 4:28-30). These are the tactics and tools of the King of Combat, Jesus Christ.

Men of God should be governed by self-control and complete dependence on God, not their physical ability or technical prowess. The fruit of wisdom is gentleness and the willingness to yield (James 3:17). The Christian is to endure hardships and physical persecutions using the God-ordained means of defence; the government (Romans 13:1-7).

Vale Tudo-style tournaments like the UFC should be criminalised, with Christians condemning such practices.

Engaging in BJJ as a bit of exercise is fine. However, it is a form of self-deception to believe that BJJ is a virtuous practice when seeking to defend oneself or be an imitator of Christ when physical conflicts present themselves.

I practice Jujitsu and enjoy the tough aspect of it. I love to compete and I do Jujitsu because it gives me a sense of peace, community, and makes me stronger. I do not want to hurt anyone, but I… Read more »

Hi Christian, These are some important issues to address. It can be challenging to excel in any sport unless your fully dedicate your life to it. I am reminded of Paul who says: “Do you not know that those who… Read more »