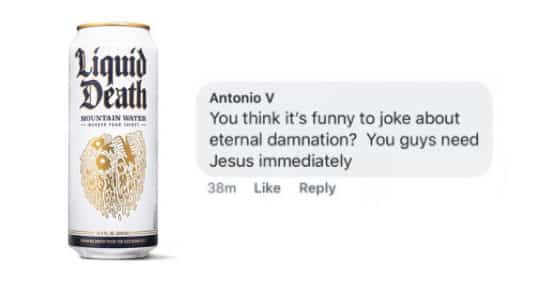 You think Esau got the short end of the stick for selling his birthright for a bowl of soup? Satanic water company Liquid Death is offering a t-shirt and club access if you purchase their canned water in exchange of your soul.

Come on kids! Even Tony Hawk is doing it. He’s cool, right?

Liquid Death premiered in early 2019, and apart from appealing to the worst qualities in human nature, it is a total marketing disaster.

You can imagine that such an ad campaign would garner some kickback from Christians, and… well, sane people.

However, righteous retorts are ridiculed and then used in their advertising such as this rebuke from a Christian.

Liquid Death is overpriced, aluminum-canned water that retailers don’t even want on their shelves due to its name. Apart from its unappealing name and logo, torture, pornography, environmental shamanism, witchcraft, and Christian ridicule are used to market the brand which hides behind a pretense of health and environmental concern to target people who don’t care about their health or the environment.

Keep in mind that TheoNerds was banned from Facebook advertising for running ads attempting to promote anti-porn services.

Such a phenomenon exposes that the “brand safety” propaganda that Big Tech touts is, in reality, a front to censor views they find politically distasteful: Christianity.

How To Report These Ads

Take, for example, this advertisement that portrays a woman torturing a man. This shows the viewer how to conduct a torture technique known as waterboarding.

On the bottom right of the video, there are three dots. Tap this and select “Report”.

Select the time stamp of 1:06 and then copy and paste the text below and hit submit.

Torture: A violation of your policy found here: https://support.google.com/youtube/answer/2802008

Select the three dots on the top right of an ad you want to report and tap “Report ad”.

Let us know in the comments below if you reported the ads or if you need any help.

CEO of Liquid Death Mike Cessario, who featured in an advertisement disguised as a documentary (check the sponsored tag on the top left at the start of the video), flaunts a t-shirt of the Satanic band Deicide. Deicide are notorious for hits such as, “Death to Jesus”, “F*** Your God” and “Kill the Christian”, and whose lead singer literally claims to share a spiritual link with Lucifer.

So yeah, this is not an act.

To use advertisements that blatantly celebrate evil things is to de-humanise the population.

When righteousness goes out the window at large in a society through the glorification of evil, don’t be surprised that immoral people land up in positions of authority over you.

Lmao, you really have nothing better to do than flame a water company? What a loser.

Do you really have nothing better to do than read and then comment on an article about a water company? 🤣