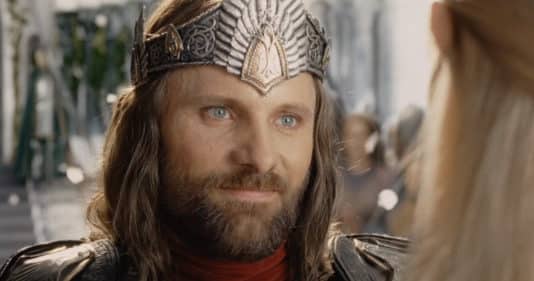 J.R.R. Tolkien, the writer and mind behind The Lord of The Rings books, was a devout Roman Catholic. We have uncovered some of the theological problems in his books here, however, do not let this fact dissuade you. Just as there is enough truth in the dodgy New World Translation to point Jehovah’s Witnesses to the true Gospel there remains plenty of material for us to use in The Lord of The Rings to point our pointy-eared friends to the truth of God’s Word.

Bring Your Pretty Face To My Bible

The reason most people read or watch The Lord of The Rings without recognising the spiritual significance of these books/films is because they don’t know the Bible. They see wizards and orcs fighting with flashes and bangs and then go about their day.

The Lord of The Rings is subtle and certainly not a Christian analogy, rather, think of the saga as containing Christian themes or tropes. For example, there are elements of Gandalf that are Christ-like (resurrection, rides a white horse delivering all in Helms Deep), elements of Samwise Gamgee that are Christ-like (faithfulness, suffers with Frodo on his journey), elements of Frodo that are Christ-like (is meek and in weakness destroys evil while resisting temptation), and there is even reference to God’s provision in the wilderness (lembas bread being a picture of mana), among others. When you start looking at this material through a biblical lens you will easily spot the dim glistening of Gospel mithril amidst the darkness.

While each of the above ideas could have its own article, in this piece I want special focus to be placed on Aragorn. Aragorn has one of the strongest narratives throughout the books and films, with even the last book/film in the series being named after him. So where am I taking you?

So Aragorn is an outcast feral man (who probably smells like the armpit of a troll) who obtains the once-broken-but-now-reforged blade called Narsil (I feel so nerdy saying that). This was the weapon that weakened Sauron but did not ultimately destroy him (The Cross).

Aragorn then returns to the city on a hill called Gondor (Jerusalem) which is being besieged by multiple armies and allies of Sauron from around Middle-earth (Armageddon) and is then crowned king and united with his elven-bride Arwen (the Church) after victory.

It is at his crowning ceremony that Aragon recites the Oath of Elendil. Elendil was the father of Issilur, the guy who did not CAST IT INTO THE FIRE! Who didn’t DESTROY IT! Anyway, I have included the text of the oath and my translation:

Oath of Elendil (My Translation)

You can also listen to it here. Are you starting to see how this material can be used to accommodate a conversation about the Bible?

The Lord of The Rings has inspired many writers, game developers and filmmakers who have all borrowed tropes and elements from the works of Tolkien. The tropes of elves being nimble, wood-loving creatures, worlds basked in myth, epic landscapes, dwarfs and orcs all have their roots in The Lord of The Rings.

This means any work that borrows from these tropes is in a sense borrowing from source material that has strong Christian themes. When understanding this, the Christian always has a context from which they can move from the higher fantasy landscape to the ultimate story, the Gospel.

Can I encourage you to try this at your local tabletop games shop, or with that gal in the coffee shop you see reading The Hobbit? Or the guys in the park playing Magic The Gathering? You will be pleasantly surprised how easy this is to do and it will swiftly make furrowed ground for the reception of the Gospel.