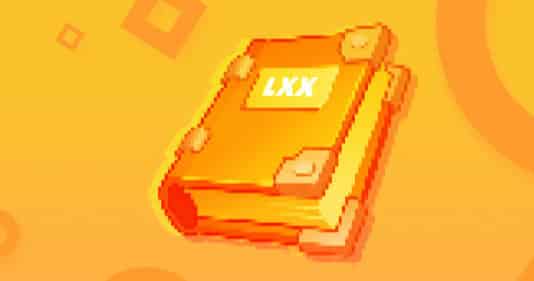 Seventy scholars (Some sources say 72) undertook this feat which resulted in the Septuagint translation. This translation of the scriptures is also known as the LXX, which is the Roman numeral for, you guessed it, 70.

The Septuagint (LXX) is a Greek translation of the Old Testament, and here are some reasons why you need one in your library.

Have you ever read a quotation of an Old Testament scripture in the New Testament, only to go back and see that it is not the same?

No really, check it out. Compare these verses in a modern Bible translation (NIV, ESV, NKJV, etc.) as an example:

Notice how “But if anyone draws back, My soul has no pleasure in him.” is omitted.

The reason for the discrepancies is because modern Bible translations use the Masoretic Texts (A post-Christ Hebrew translation of the O.T.) as the main bases of their translations. The New Testament writers are quoting the Septuagint. Yes, The Apostles themselves read and taught from the LXX. Pretty neat, right?

It is important to note that most modern Bibles have footnotes demonstrating the small variances between the Dead Sea Scrolls, Septuagint and the Masoretic Texts, among others.

Has The Bible Been Corrupted?

Now, none of these minor discrepancies is going to break your theology. God has promised to preserve His word (Psalm 100:5), and the meaning is apparent in all translations. It’s merely worth pointing out.

When digging deep into the scriptures, always compare various translations and look into the original languages. I would recommend the Blue Letter Bible for doing this. When searching for a scripture, tap the “tools” button next to the verse to pull up the Greek.

Caution When Cross-Referencing The LXX

You have to be particularly careful when cross-referencing the Psalms in the Septuagint with other translations. The Psalms in the Septuagint have a different numbering system of chapters and verses. For example, Psalm 50 in the LXX is Psalm 51 in other Bibles. There are also differences in indexing with regards to the books of Jeremiah and Malachi.

Also, be aware of the following differences in book names:

The LXX also includes the Apocrypha (non-inspired books of history) which is good to have on hand (The KJV originally included it too). The book of Daniel also contains an epic battle against a dragon and a Sherlock Holmes type of investigation around a mysterial Idol called Bel that consumes food!

Some sceptics argued that the Hebrew word for virgin in Isaiah 7:11-14 should translate as “young woman”, but Greek has the advantage of being super precise and in the LXX virgin is clearly the word used.

This is an example of the advantage of having an LXX on hand to compare scriptures. When doing in-depth Bible studies always look up the original word and seek to understand the context of the passage.

The LXX English translation I use is the Orthodox Study Edition compiled by St. Athanasius Academy, which includes an NKJV of the New Testament in one binding. This is an Orthodox Church production, so I had to cut out the creepy pictures of Mary. It also contains Orthodox commentary on Bible passages in the study notes; I ignore this. However, they are interesting to read should you want to know what the Orthodox Church teaches or believes.

Once you get your hands on an English translation of the LXX, compare the following verses with your other Bible translations and let others know what you discover in the comments below!

When digging deep into the scriptures, always compare various translations and look into the original languages.