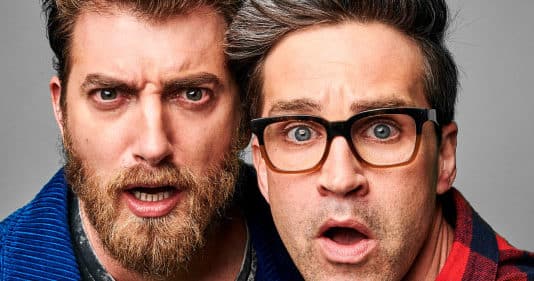 We love geeks, and Rhett and Link are definitely on the geeky spectrum. Since we are committed to helping geeky parents stay updated on the latest pop-culture news, we felt it necessary to help you process Rhett and Link’s four part podcast explaining their departure from Christianity.

This honestly did not come as a surprise to us, in fact we had no idea they even claimed to be Christians before seeing them on Jellytelly (now Minno) as the Fabulous Bentley Brothers singing Bible songs. Christians should always be sceptical of those who claim to be Christian but are also loved by the world. The scriptures are clear:

“They are of the world. Therefore they speak as of the world, and the world hears them. We are of God. He who knows God hears us; he who is not of God does not hear us. By this we know the spirit of truth and the spirit of error.” -1 John 4:5-6

I personally believe it is impossible to amass a 16.4 million and more following if one were truly being salt and light in this world. Christians are promised marginalisation in this world, not riches and fame (John 16:33).

We are commanded to examine the fruit of other Christians to determine whether their profession is legitimate or not (Matthew 7:15-20). Let us then examine the fruit of Rhett and Link as they describe their own journeys away from evangelical Christianity and towards “hopeful agnosticism”.

They open their podcast “Our Lost Years” by explaining that they have not spoken previously about their beliefs because they are “super-inclusive”. (6:20) They have just admitted to not speaking the truth publicly to remain popular. Does this sound like the fruit of Christian behaviour? See how John the Baptist lost his life for speaking an unpopular truth (Matthew 14), or how about William Tyndale who lost his life for translating the Bible into English, or John Bunyan who was imprisoned for preaching, or Richard Wurmbrand who was tortured for practising Christianity?

Our Years As Missionaries

In their second episode they explain their involvement with Campus Crusade for Christ where they got involved in campus ministry because they liked the attention they received on stage while volunteering as students. Upon graduating as engineers and receiving jobs in those paths they soon quit their engineering jobs to gather funds under Campus Crusade through Christians pledging money to them. With this income they produced comedic videos with the proposed intention for Christians to use them in evangelism.

However, they admit during this time that “none of the videos were religious, all the videos were purely comedic” (18:05) and that “there was no message, this was just supposed to be fun.” (18:55) They even comment about how they used to make videos in the Campus Crusade office low-key because they were used to the judgments of staff thinking “How does this directly relate to the ministry?” (59:20)

They also explained that they “were most passionate about the performance and growing the audience” (1:05:10). Should not Christian missionaries be most passionate about the glory of God? Or the command of Christ to make disciples of all nations? Rhett and Link were never Christian missionaries; they were opportunists that were given a platform using ministry funds to develop their entertainment skills, grow an audience and build a business.

It is possible to search the scriptures and THINK you have eternal life (John 5:39). It is possible to call Jesus Lord while being damned (Matthew 7:21). In fact, the demons believe in Jesus and tremble (James 2:19). This is why there are calls in scripture to examine oneself to see if one is truly in the faith (2 Corinthians 13:5).

What is clear from Rhett’s testimonial is that he expects us to take his word above God’s Word. He states: “Jesus was as real to me as He possibly could be” (10:58), well I read in the Bible that those who leave us were never among us (1 John 2:19), and that the partakers of Christ hold their confidence steadfast to the end (Hebrews 3:14). I suggest you believe God over Rhett.

Rhett concludes that “I lost my appetite for certainty…I don’t have to be certain about these things.”(1:15:29) Are you certain that you stopped caring about certainty, Rhett? Rhett is telling us that when you stop caring about truth you can live how you want- yay!

Link’s objections to Christianity were rather rooted in his personal emotions. He explains how he felt guilty or distant from God. Either way, truth is not determined by how we personally feel about it. If I were to feel rich it does not change the reality that I’m broke. I might feel like eating out but in reality I can’t afford it. Link’s feelings are irrelevant to objective truth.

You see, it is easy to deny Christ once the world loves you and is giving you their money. It was of no advantage to Rhett and Link to deny Christ while they were dependent on the support of gullible Christians. Link explains that he kept his doubts private for fear of becoming homeless (42:25). This shows an incredible lack of integrity and cowardice.

Rhett and Link’s complete ignorance of scripture is telling of their false conversions. They say things that are blatantly wrong, like the age of accountability not being in scripture (11:20 See 2 Samuel 12:20-23, Revelation 7:9), and their ignorance of the Bible’s explanation of the reality of God’s law being written on the hearts of pagan peoples: “you find a culture in the middle of the Amazon that has never been exposed to the gospel or any sort of religious system outside of what they believe, but they are gonna think that murdering is great?” (1:28:25) In saying this, Rhett is clearly demonstrating his ignorance of Romans 2.

Their understanding of Christianity was about “inviting Jesus into your heart”, a term that is not found in scripture. Their experience of Christianity was altar calls, easy believism, seeker sensitivity and goofy youth ministry- all of which are not found in scripture either. The reality of Rhett and Link’s testimonials shows us the importance of teaching apologetics, turning our homes into spiritual armouries and not shying away from controversies and challenging questions to the Christian faith.

My hope and prayer is that you and I would never become so successful, rich and confident that we would think ourselves wiser than God. Take the world and give me Jesus, all its joys are but a name!

“Give me neither poverty nor riches— Feed me with the food allotted to me; Lest I be full and deny You, And say, “Who is the Lord?” Or lest I be poor and steal, And profane the name of my God.” -Proverbs 30:8-9