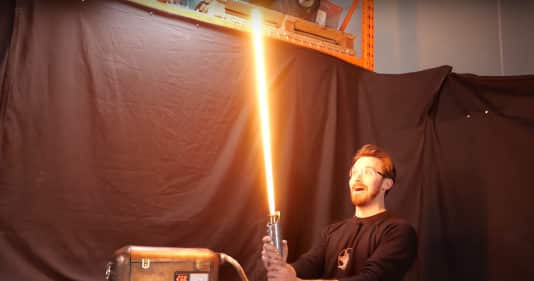 A short time ago (December 2019) in a galaxy not too far away (Canada), the world’s first protosaber was unveiled. What is a protosaber? Good question. According to Saber Sourcing, a protosaber is “a corded, archaic, single-bladed lightsaber design from Star Wars Legends. Protosabers, which are used during the Old Republic era, are the first known lightsabers.”

(If you like background music while you read, enjoy this violin Star Wars Medley by Taylor Davis!)

James Hobson, the self-proclaimed Hacksmith from Hacksmith Industries, has engineered a prototype of a protosaber. Though the Jedi Knights are able to use a “standard, everyday power cell” to power their sabers, James explains that the power actually required to replicate a working saber is equivalent to that of a nuclear reactor– which is difficult to fit into the hilt of a sword. (If you figure out how to, let us know!) The team at Hacksmith Industries was able to construct a battery backpack weighing about 50 lbs in order to power their protosaber, which, while impressive, is not very sustainable. We’ll still need to develop another way to achieve the “unlimited power” the Emperor desires and the sabers require.

According to Star Wars lore, every Jedi youngling is required to build their own lightsaber before they can become an apprentice. While Jedi are most recognized by their lightsabers, their weapons are not all that they held dear. A phrase recognized even by someone who has never seen Star Wars is “May the Force be with you.” This may sound similar to a common Roman Catholic phrase, “May the Lord be with you.” As explained by Obi-wan in the movies, the Force is:

“what gives a Jedi his power. It’s an energy field created by all living things. It surrounds us and penetrates us; it binds the galaxy together.”

The Jedi were a religious order, who essentially worshipped the Force– at least the Light side. They had sacred texts describing the history of the Jedi, Jedi precepts, and the Jedi Code. The mantra of the Jedi Code, as found in Dark Disciple, a canon Star Wars novel written by Christi Golden:

When creating his sci-fi religion for his peaceful warrior monks, George Lucas pulled from many different modern religions to give a basic framework. In addition to the idea of a parting benediction, Lucas also borrowed from Christianity the prophecy of a Chosen One, or a Saviour, to deliver the Jedi. Unlike the true Saviour, Jesus Christ, the Chosen One ended up turning to evil deeds, including murder. Thankfully, our Saviour is pure and holy, and while He did descend into the depths, He emerged victorious without succumbing to them.

The rest of the Jedi religion was largely based off of Taoism and Zen Buddhism. Taoists believe in Yin and Yang (Light side and Dark side, Jedi and Sith) as the balanced forces of the universe. They also believe that one should harmonize with nature, as the Jedi strive to harmonize with the Force.

Too much of a good thing?

While the ideals of a Jedi sound good, we must be careful not to be deceived. Jediism is gaining in popularity in this world, starting around 2001 when a significant number of people recorded “Jedi” as their religion on the census. While it’s not legally considered a religion yet, there are a great many people choosing to adhere to an adapted version of the official Star Wars Jedi religion. This article from Learn Religions lists 33 different teachings Jedi devotees should abide by. So, what’s the big deal? What would be wrong with accepting the teachings of this harmless order, who pursue peace and justice?

As Christians, we must be careful to separate our enjoyment of fantasy (and sci-fi) from our reality, and we must guard ourselves from being swayed by what is popular or what appeals to us. The Bible has many verses addressing this sort of thing.

“For the time will come when they will not endure sound doctrine; but wanting to have their ears tickled, they will accumulate for themselves teachers in accordance to their own desires,  and will turn away their ears from the truth and will turn aside to myths.”

Likewise, the Apostle Paul chastises the Galatians for turning from the Gospel in Galatians 1:6-9:

“I am amazed that you are so quickly deserting Him who called you by the grace of Christ, for a different gospel; which is really not another; only there are some who are disturbing you and want to distort the gospel of Christ. But even if we, or an angel from heaven, should preach to you a gospel contrary to what we have preached to you, he is to be accursed!  As we have said before, so I say again now, if any man is preaching to you a gospel contrary to what you received, he is to be accursed!”

The second half of this verse is rather well-known, but the first half is often left out. In Joshua 24:15, we read:

“If it is disagreeable in your sight to serve the Lord, choose for yourselves today whom you will serve: whether the gods which your fathers served which were beyond the River, or the gods of the Amorites in whose land you are living; but as for me and my house, we will serve the Lord.”

And yes– as for me and my house, we will serve the Lord, and we will teach our children to do so. We enjoy Star Wars, but we worship the true, living God of the Bible, who cares for us and demands our undivided reverence. As for the Hacksmith? Well, we will watch his career with great interest. 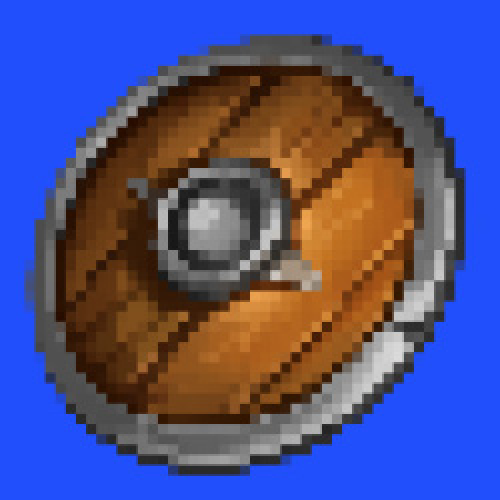