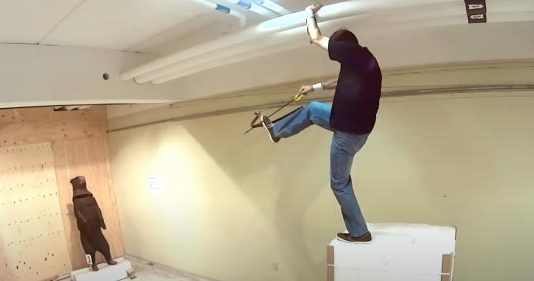 Modernist evolutionary presuppositions tend to lead people to the conclusion that warriors in the past were primitive stick-throwing goat herders.

What Lars Andersen, an archer from Denmark, discovered from studying archers from antiquity is that pretty much everything we know about modern archery from Hollywood films is a big fat lie!

We have been deceived! Aiming with one eye, a quiver on the back, obsession with accuracy, and shooting inside the bow are all exposed as myths! Mobility and shooting speed were the focuses of ancient archery masters.

He Can Even Pwn You When You Are LOSing Him

I know what you are thinking, “I can just hide from Lars Andersen, like behind a wall or something if we were to have an epic battle”.

He would still get you with his air-defying bending arrows!

This puts a whole new meaning to the sons of Ulam (1 Chronicles 8:40) and Reuben, the Gadites (1 Chronicles 5:18), or Ahiezer and his men of war who likewise were noted for their ability to shoot with both the left and right hand in 1 Chronicles 12:1-3.

So what are you waiting for? Stop letting him throw a ball around your backyard and go get your husband a bow and arrow because apparently, it’s pretty much the same thing.