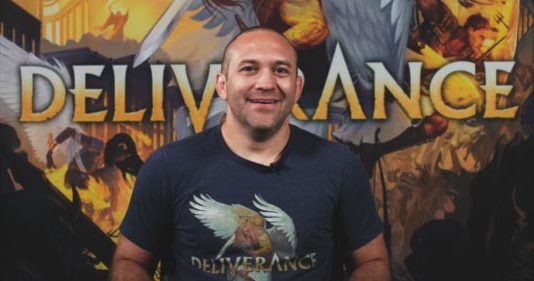 The Most Funded Christian Board Game Of All Time Has A New Trailer Out, And It’s Lit!

In a recent Kickstarter update, board game developer Andrew Lowen revealed a new trailer for his smash hit angel vs demon board game, Deliverance.

Should you have missed the Kickstarter, Deliverance is still available for pre-order via the pledge manager here.

The update also included an announcement for a new playable angel as swift as the wind and a master of hand-to-hand combat: Taolu, Windwalker.

Inspired by martial arts tropes, Andrew describes this angel as:

“A high-risk, high-reward fighter that balances strong offensive power with natural defenses. He has very low health, yet with the right technique can stand against even the mightiest of foes due to his Deadened Nerves passive skill. Though he has no skill to assist other angels, a clever use of positioning will be assistance enough… if you can survive the onslaught!”

You can currently play Deliverance for free via Tabletop Simulator.

Here is a step-by-step setup guide for setting up a digital version of the game; you can even find other players to game with via the official Deliverance Discord Server.

Deliverance: The Game of Spiritual Warfare is currently the most funded Christian board game of all time (raising $314,374 from 2,717 backers) and is one to keep both eyes on!

Andrew happens to run a marketing agency so should you ever desire to crowdfund a Christian project he is someone you should connect with!