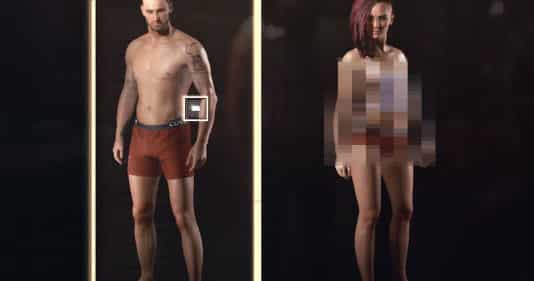 Cd Project Red, that wonderful and morally upright company that brought the world The Witcher 3, is now threatening to blow Rockstar Games, the creators of Grand Theft Auto, into a chamber of immoral irrelevance.

Their newest title Cyperpunk 2077, a Blade Runner inspired dystopian transhuman nightmare RPG now allows players the ability to customise the size of their character’s genitalia in a world that promotes drugs, crime, gangs, dismemberment and prostitution.

But why stop there? Have you ever wanted to escape into a world where you can enjoy crucifying someone? The ESRB rating summary includes this portion which sounds very much like crucifixion: “During one quest, players assist a character by hammering nails through his hands and feet”. (Source)

Why would anyone want the ability to modify the sexual organs of a video game character, you might be thinking. Well, fortunately the ESRB tells us:

Yes, prostitution, drugs, crime and murder are illegal in our society but are all just fine when glorified in a video game.

The fact that there is even a public and legal market for such a game is an indictment on the morals of Western civilisation. How can any of this be classified as entertainment?

For our dispensational pre-mill friends, it seems that the game’s objective is to retrieve an implant that grants eternal life. It would not surprise me if such an implant was inserted into the hand or forehead.

It seems God is pleased to allow this world to embrace greater and greater degrees of madness and depravity before the end. Just like the land of Canaan could not be conquered by the Israelites until the wickedness of the Amorites was fulfilled (Genesis 15:16), we too are heading into a future whose culture is reminiscent of the days of Noah (Matthew 24:37-44), one in which every thought and intent of the heart is only evil continually (Genesis 6:5), and the earth being filled with violence. (Genesis 6:11)

One day such disgusting portraits of humanity will be but a memory and shadow. Let us then not be disheartened by such news but rather let it encourage us to boldly proclaim Christ as we see the Day approaching and recognise God’s sovereignty and plan in bringing universal judgment and rest to this world.