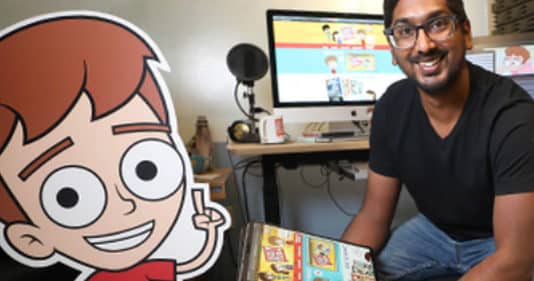 Girish Manuel is a Christian Canadian animator and content creator who works for Square One World Media producing Micah’s Super Vlog. Micah’s Super Vlog is a superb and Biblically sound kids show about a boy in school named Micah and his friend Lydia and Armin. They get up to some crazy adventures, have epic robot battles, and even rap now and again. Micah’s Super Vlog can be viewed on Minno. Girish graciously agreed to be interviewed via email for you, our TheoNerds. Enjoy:

What is the strangest thing you have witnessed in Winnipeg, Canada during Covid-19?

I think because of the combination of Winnipeg not being hit that hard and my work being fairly isolated, things haven’t changed drastically, besides church, which we stream … however, a few months ago people were going CRAZY to buy toilet paper! People were more worried to run out of TP than they were to run out of food.

One of the things I miss is teaching Sunday school. We are doing some special events at the church where the families drive up and we do activities while social distancing, but we don’t connect like we used to.

A thing I actually enjoyed about the pandemic is being able to work from home! Nikki (Girish’s wife) was happy to have me there and I felt like there were less distractions so I could focus on wrapping up the big episode!

Absolutely! It’s a 12 min episode called ”Show and Smell” involving Gabe, a skunk, a fish hat and Micah in a garbage bin! The lesson is about labels/nicknames that we all get growing up, and how the only label that truly matters is being a child of God!

The episode is releasing in 3 or 4 weeks and a teaser can be seen here.

Girish, you and your small team are the quintessential examples of a Christian animation studio running on a shoestring budget, yet Micah’s Super Vlog is a series that could easily sit side by side with any multi-million dollar-backed kids show on Nickelodeon or Cartoon Network right now. What is driving you and your small team?

First of all, thank you very much! High praise that I’ll toss up to the Heavenly Father!

I believe God will use the gifts He gives us, if we commit them to Him! I’ve seen evidence of that, and continue to every day, especially now that we’ve introduced the mailbag videos. We get questions, comments and fan mail from all over… Australia, UK, South Africa, Fiji, Mexico, US … it’s overwhelming. I love it!

Despite our limitations, Micah’s Super Vlog is enjoyed around the world! The fact that we’re doing this interview, is a huge blessing and evidence that Gods using the little cartoons we cook up here in Winnipeg!

There have been days where I’ve felt discouraged, but (I’m) thankful He’s taken me from that, grown me and showed me lots of fruit of this project! I can’t go into details, but I definitely see the future of Micah’s Super Vlog to be a bright one. It’s also very helpful to have a supportive wife who loves me!

How did the idea for Micah’s Super Vlog come about?

In 2014, while working as a designer at Square One World Media, an opportunity came about to pitch ideas for new ministry projects. Even though I had never made a cartoon series, I gave it a shot and created a pitch the concept for Micah’s Super Vlog. Surprisingly, the board went for it and allowed me to develop the show! What followed was a steep learning curve, but God brought along the right people to help me create something special!

I wanted to create a cartoon that would balance funny and exciting, like something I would watch after school when i was a kid…. and something that brought solid biblical truth, help kids know who Jesus is, and in their faith journey. Basically the main goal was, I wanted the show to get kids excited about Jesus!

Looking where we are today, I believe that Micah’s Super Vlog is doing just that.

What advice would you give to young Christian creatives that hope to one day break into a similar industry?

First of all, pray about it, and give it to God. One of the most important things to remember is that if God is truly behind something, it will be done! Otherwise, how else can you explain Micah’s Super Vlog?

That being said, its going to happen in His timing, so get used to practicing patience haha. While you wait on him, don’t give up, keep writing, drawing, animating.. generally just keep getting better at what you do!

Thirdly, get experience where you can, there are many aspects to animation, and you might be good at a few. If you can, learn about everything from writing and storyboarding to animating and sound design, it’ll help you better understand how to be better at whatever it is you do and where your role fits in the process.

Lastly, the animation industry is built on teamwork, so finding skilled people you work well with is important! Make friends and do fun projects with them! I met Stu at an animation festival here in Winnipeg back in 2010. We did lots of little projects back then and even made a short animation called “Puppy Love” just for fun.  Now he’s the art director and designer of Micah’s Super Vlog!

What else are you excited about in the near future?

In the near future, there are a few videos that are, to me, hilarious. Gabe sings about being thankful, Mr Turtell sings (well sort of) about donuts, and Micah learns to work hard for the Lord in a montage!

We’re also partnering with Timbuktoons to help animate our video on thankfulness!

Where can people go to learn more about Micah’s Super Vlog?

www.micahssupervlog.com is where people go to know more about Micah’s Super Vlog, and download resources like activity packs. You can also find donate links to support the ministries at Square One.