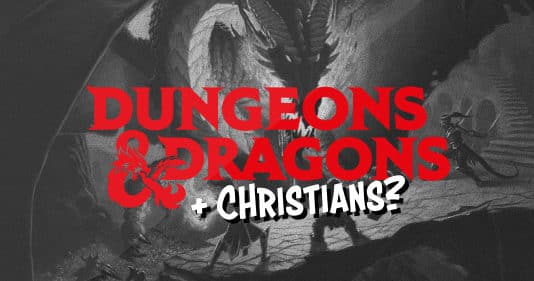 What Is Dungeons And Dragons (D&D) Should Christians Play It?

In the case of D&D players work together to defeat obstacles, challenges or whatever else is before them by rolling dice to determine the outcomes of such actions. The term “higher fantasy” essentially means a Tolkien / C.S Lewis type world set in a pseudo-medieval period with dragons, trolls, elves and a myriad of other mystical creatures.

The circumstances players find themselves in in D&D and the world that is created around them is designed and manipulated by a separate player called a Dungeon Master. This is the guy or gal behind a cardboard wall scribbling notes on papers and rolling dice and doing calculations.

The issue as to whether D&D is harmless or not is complex due to the nature of role-playing games. Essentially D&D is an interactive storytelling experience with an element of risk and uncertainty thrown in due to the dice rolling mechanics.

Jesus said that from the overflow of the heart the mouth speaks (Luke 6:45), so if you have a bunch of perverted, devil-worshipping, blood-lusting weirdos write a book, make a film or in this case play a game like D&D, you will run into dodgy content.

However, it would be wrong to say that because there is vile content in books, therefore all books are bad. Likewise, we can’t paint with such a broad brush when it comes to role-playing games, both in a positive or negative respect.

Sorcery, Witchcraft and the Devil

It might surprise you that Satanism is far more widespread than you would have ever possibly imagined. Ever hear things like this “I’ll have a great time in hell because all my friends will be there”, or “if someone was to attack me or my family, I would destroy them”?

These are actually paraphrased quotes straight from Anton LaVey, the pioneer of modern Satanism:

“If everyone goes to hell, then you will meet all your friends there. Heaven must be populated with some rather strange creatures if they all lived for was to go to a place where they can strum harps for eternity…Hate your enemies with a whole heart, and if a man smite you on one cheek, SMASH him.”

Therefore, those who espouse such ideas are either knowingly or unknowingly promoting Satanic thought.

“that they may come to their senses and escape the snare of the devil, having been taken captive by him to do his will…” (2 Timothy 2:26)

So there is no “Satanic Panic” (a term coined by the media due to the hysteria around D&D in the 80s) because everything that turns from Christ and His attributes is Satanic- the education system, the secular films your children watch, politics, the health care system… you get the idea. We are in the world, and not of the world.

Jesus knows that this evil is around Christians all day long and prays in John 17:15-17 that we be delivered from it by the truth of His word.

“There shall not be found among you any one that maketh his son or his daughter to pass through the fire, or that useth divination, or an observer of times, or an enchanter, or a witch. Or a charmer, or a consulter with familiar spirits, or a wizard, or a necromancer.
~Deuteronomy 18:10-11

What is the difference between all these types of occultic practices? Why use so many words to describe the same thing?

Ken Johnson (Biblefacts Ministries), has created a wonderful video explaining the differences between the different terms used in Deuteronomy to describe the practice of demon worship. He looks at ancient texts and examines how these words are used to describe certain occultic behaviours.

Essentially, Ken’s point is that sorcery biblically speaking is any contact with demonic spirits through an altered state of consciousness either through drugs (Pharmakeia is the Greek word used in Galatians 5:20 for witchcraft and is the same root of the English word pharmacy) or through occultic meditation. I say occultic meditation because Biblical meditation is about filling your mind with God’s truth not emptying it (Psalm 1:2).

Let’s ask, is this the intention of people playing D&D on a Saturday night? Probably not. We have to make a distinction between real occultic practices and fantasy.

Sorcery and magic must always be demonstrated within our homes as a vice and something not to be celebrated. However, games that depict magic such as the turtle-crushing, chivalrous capitalist plumber Mario in Nintendo’s Super Mario franchise who can shoot fireballs upon picking up mushrooms on his quest to rescue the princess in the castle who has been taken by the dinosaur can be seen as harmless and a fun mechanic in an already wacky game. (Unless the creators are trying to tell us that by Mario picking up a mushroom, he’s entering another state of consciousness so that he can shoot fireballs due to demon contact. #mindblown)

This is why in my conscience I would have reservations with Harry Potter, due to its frequency by which it references real occultic practices and writers such as Helena Blavastsky, the founder of the Theosophy movement.

However, Tolkien and Lewis’ fantasy worlds use magic as a fanciful tool to communicate transcendent truths about God in the same way Jesus used parables or fiction to communicate theology.

In fact, it was the desire that fantasy, in the minds of Lewis and Tolkien, would highlight elements of reality for people and not help them escape it. This is what good fiction does. It allows us to ultimately love God more.

I’d Rather Die than Cause Christians to Stumble

So, can D&D be used to get people into altered states of consciousness to come into contact with demons? Possibly. Can D&D or role-playing games, in general, be used to highlight spiritual truths? Absolutely.

The point is that Christians should limit their contact with worldly people anyway. Let’s follow Jesus example who ate with sinners to call them to repentance. Evil company corrupts good habits, so our time with unbelievers must be intentional.

Due to higher fantasy’s roots in the writings of Lewis and Tolkien (who were largely operating within a Christian framework), there are lots of opportunities to preach the Gospel to this community if you do some research on these writers.

Paul the apostle said that if a Christian were caused to stumble by him eating meat, he would never eat meat again (1 Corinthians 8:13). There is nothing wrong with eating meat. In fact, there are strong arguments from scripture to eat meat. The point is that because of the weaker conscience of the other Christian Paul would do the utmost to love them.

We, therefore, must do the same when engaging in materials that have fanciful magic as it might be a stumbling block to others.