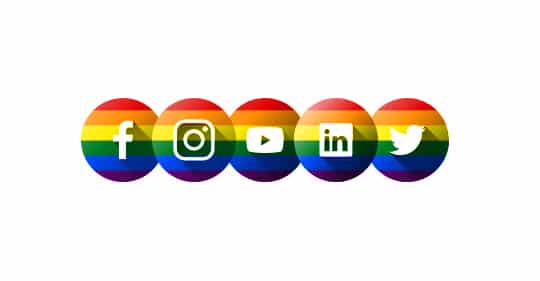 Algorithms, algorithms and more algorithms. This is what tech giants such as Facebook, Twitter and Google pride themselves on. Algorithms supposedly exist because the sheer amount of data that is submitted to these sites would be so overwhelming for you, the user, that you would panic, abandon your device and revert to the fetal position in the corner of the room as you await rescue. However, I suspect that algorithms are in reality a subtle way of controlling the flow of information you receive to shape your opinions via the promotion of propaganda and to manipulate you to spend more time on their sites to present you with more ads to line their deep pockets.

I was taken aback by the number of drag queens Microsoft has been promoting of late. There is a clear intention to desensitize the masses to sexual perversions. This agenda has dominated Hollywood and mainstream media since the 60s. Pride month is a prime example of this cultural zeitgeist. However, why should we expect companies that promote immorality to act morally? Should we trust them with our most intimate personal details? Should we be using their services at all?

The Battle of Information

The freedom to communicate Gospel truths has always been the battle of the Christian throughout the ages. The Gnostics sought to corrupt the scriptures with dubious copies and fake epistles. Roman Catholicism sought to hold the scriptures in darkness from the common people and be the primary means of thought control. The spread of communism outlawed Christianity in the nations it dominated. Is Big Tech the next enemy in the battle of Gospel communication?

We have written an extensive 3 part article series exposing the problems with Facebook and explaining what you need to do to lock down your profile. These are tips we would recommend to those who have to be on Facebook for work or social commitments. But what if you only go to Facebook to see what is happening in the world, to follow Christian ministries or get tech updates?

The problem with Facebook, in particular, is that you can only follow 30 pages or people at a time and that is only if you have enabled such a feature. Apart from this you are at the complete mercy of their algorithm.

The concept of subscribing on YouTube has become meaningless as one seldom sees notifications from channels you follow (hence the plea from many content creators to “hit the bell”). The platform is designed to get its users reliant on suggested content through an algorithm rather than searched or shared media by real humans.

The fix to this problem is to go directly to the news agencies, ministries or blogs you want to follow. You could sign up to their email newsletter, however, this would be time consuming, and email providers such as Gmail seek to automatically file or suppress emails using their “category” system. Outlook has a similar feature. This seems to be the trend in these “free” email providers and I assume it will only get worse in time. I have also started seeing ads in my Gmail that I can’t hide or remove. With this in mind your inbox can quickly become flooded with emails and difficult to navigate.

The fix is to use Feedly. You are able to subscribe to the RSS feeds of websites and create your own news feed that updates in real time. This means as soon as an article is posted on a website that you are following it will appear in your feed.

You can create multiple feeds to narrow down topics. For example, I have a “Theology” feed with Christian ministries, a “Geek” feed to stay on top of tech/pop culture issues, and a “News” feed for current affairs.

You can also add YouTube channels to Feedly. There are many options to customise your feeds. I suggest enabling the ability to show “latest” content instead of popular, this way you will see articles and media posted in real time. This is how news feeds are supposed to work. And this can all be done for free! (There is a paid version with added features).

Remove Big Brother’s heavy hand and annoying ads from your feed for good. While you’re at it, search for TheoNerds.net and add us to your Feedly feed or sign up to our article email updates.