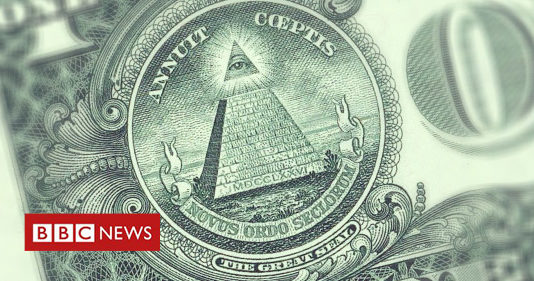 The BBC Says The Eye of Lucifer Is A Christian Symbol

Hello uninformed public, did you know that the Eye of Lucifer (which is prominently featured in pop-culture, as well as the back of the $1 US bill) is, in fact, a Christian symbol of God’s providence? Oh and if you disagree, you are a conspiracy theorist, reports the BBC in their latest scoop on Freemasonry.

Authored by Matthew Wilson, clearly, a master of Christian theology, having studied the texts of the Old and New Testaments in their original languages, has deduced the following from sound exegesis. After all, the BBC is an authority on such matters.

In reality, the Bible was not referenced even once when making such wild assertions. Matthew Wilson appears to think that “Christian” art stands as an authority on orthodox Christian beliefs. With the use of some post-modern deconstruction techniques to interpret surreal paintings to justify his claims, it is hard not to laugh out loud when considering this foolish publication.

As the BBC promotes a mythological view of history that has its roots in ancient pagan beliefs: evolution, their means of interpreting historical documents and events is a little misguided, to say the least.

The All-Seeing Eye / Eye of Lucifer / Eye of Horus is in fact used by the occult and those initiated into the highest ranks of the mystery schools to denote a New World Order (Annuit Coeptis Novus Ordo Seclorum), under which all will be enslaved to a one-world ruler, Lucifer. It is a symbol of blasphemy and oppression, one about which the Bible has a great deal to say.

Occult means “hidden”. It is the nature of this movement to misdirect and misguide those investigating their true beliefs. The actual doctrine of mystery schools is so vile that there was once a time when proponents of such views would have been put to death (and will be when Jesus returns).

One must understand the differences between esoteric and exoteric definitions when seeking to interpret occult symbols. Saying that the Eye of Lucifer is, in reality, a symbol of The Great Architect of The Universe’s loving eye of providence is what is communicated to the profane/ uninitiated, or lower ranks of The Order. This is the exoteric definition shared with the masses to normalise its use and misguide naive journalists.

The esoteric definition, or the true meaning, is that of global domination by controlling the global economy through private central banks. Anyone who has studied the history of modern banking, money as debt and fractional reserve lending can understand why the lovers of money have plastered the symbol of their master on their idols.  The Money Masters has produced a well-researched documentary on this phenomena alongside Christian documentary maker Chris Pento.

To learn the truth about Freemasonry, see this TheoNerds article.

What Does The Bible Say About The Eye of Lucifer?

One of the only descriptions we have of this coming world ruler is from the prophet Zechariah who describes him as a “worthless shepherd”.

It seems that this world leader will have a maimed right eye, and therefore, his only seeing eye will be used as a symbol of defiance against the judgment of God.

It is worth noting that this is proceeded by a prophecy that describes Judas betraying Jesus for 30 pieces of silver, which both John and Luke (Luke 22:3, John 13:27) explain as being carried out under the influence of Lucifer.

“And the Lord said to me, “Throw it to the potter”—that princely price they set on me. So I took the thirty pieces of silver and threw them into the house of the Lord for the potter.” – Zechariah 11:13

The book of Revelation seems to suggest that this wound will be miraculously healed and mobilise the world to worship him:

“And I saw one of his heads as if it had been mortally wounded, and his deadly wound was healed. And all the world marveled and followed the beast. So they worshiped the dragon who gave authority to the beast; and they worshiped the beast, saying, “Who is like the beast? Who is able to make war with him?”” – Revelation 13:3-4

The Mark of The Beast

This coming world leader will enslave all and will require everyone (including the bankers) to receive a mark of allegiance in order to buy or sell. This means that he must have complete control of the global economy and the force necessary to maintain this control.

“He causes all, both small and great, rich and poor, free and slave, to receive a mark on their right hand or on their foreheads, and that no one may buy or sell except one who has the mark or the name of the beast, or the number of his name.” -Revelation 13:16-17

The return of Christ is proceeded by a global government, global economy and a global system of worship.

God’s economy is one that is based upon grace. We have broken God’s law and need to pay for our crimes. God, desiring to show mercy and magnify His redeeming attributes, has sent Jesus to die in the place of His people. Jesus rose from the dead to receive the glory due to His name through this divine transaction.

Lucifer’s economy is based on debt, to which worshipers are enslaved. This is why, when given the first opportunity to attack righteous Job, Lucifer goes after his financial and material possessions (Job 1:9-11). Lucifer seems to be under the impression that people worship out of a response to monetary gain. This Luciferian philosophy is also depicted in the temptation of Christ, where riches and fame are offered in exchange for the worship and service of Lucifer (Matthew 4:8-10).

Jesus said that God and money are opposing masters that people serve (Matthew 6:24). Jesus was also furious of the money changers’ extortion of the poor, and He cleared the temple twice during his earthly ministry (John 2:11-12, Matthew 21:17-23).

Finally, this global economic system of slavery is referenced in Jesus’ parable of the talents, which describes events surrounding His return (Matthew 25:14-30). The wicked servant blasphemes God by laying an accusation against God that is rather fitting to those who benefit from debt-based economies:

Jesus then rebukes the contradictory claims of this servant and labels him lazy, evil and a slave. Jesus continues by answering him according to his folly and failed stewardship by saying he should have deposited his resource with the bankers who would have made a profit through the extortive practice of usury, or debt (Matthew 25:26-27).

When one follows the money, you will be met face-to-face with the prince of the power of the air who demands worship. It is no wonder that The Eye of Lucifer is prominently fixed on a currency that dictates the global market.

Name Calling Is A Sign Of A Failed Argument

‘Conspiracy Theorist’ is a term that will be used to label anyone who dares question the advances of globalism or the mainstream media. The mainstream media is controlled by, you guessed it; big corporations, big tech and private investors, all of which are making a sizable living from this corrupt economic system. Always remember that name-calling is not an argument.

In a soon-to-be-realised New World Order, those who are informed will be labelled ignorant by those who are truly ignorant, yet proclaimed to be wise. This is all until The Mountain cut without hands comes to smash this Neo-Babel, ushering in a true utopia of peace and justice while wielding a rod of iron.

Until then, the truth will remain stranger than fiction, and the BBC will stick to publishing fake news.