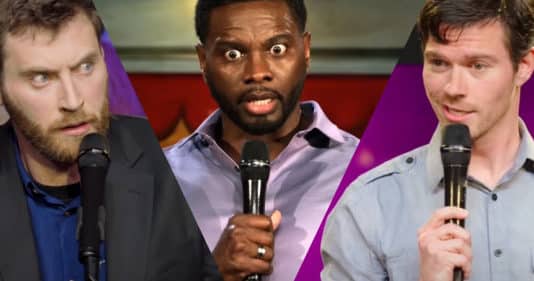 The Dry Bar Comedy network, started by VidAngel, boasts clean, family-friendly comedy (Source). However, sometimes the Dry Bar Comedy is not all that dry. I have by no means watched every show they offer, but I have watched enough to pick my top 3 by filtering out some of the unsavoury and less appropriate gigs for you.

Many gigs had enjoyable moments by very skilled comedians, but because of some crudeness, I could not include them in this list.

As Christians, we are not to laugh at the expense of the elderly (Leviticus 19:32), or the maimed (Leviticus 19:14), or even the economically disadvantaged (Leviticus 19:15). These demographics are often targets for comedians. Christians are also not supposed to engage in crude jesting (Ephesians 5:3-4). I have selected gigs that minimise these qualities while being genuinely funny (Proverbs 17:22).

This list of gigs do contain some blemishes, but I have included timestamps should you want to skip those parts or decide whether to avoid it altogether. I would recommend that you do not watch these in the presence of children.

Grab some popcorn, sit down with some loved ones, relax and enjoy some (mostly) clean comedy.

Drew is a talented impersonater, featuring jokes that incorporate his voice acting skills. He draws from his experiences of being newly married with some down-to-earth and relatable humour.

32:33 – Drew tells a joke about spending the night at a hotel with a past girlfriend.

Drew often jokes about his body image that might make some feel self-conscious or uncomfortable.

Hitting the number two spot is a gig by Rodney Laney “Why You Look Ugly In Photos“.

This one was good, and I debated for some time if it should be in the #1 spot—Rodney utilises comedy with archaic technology and cultural stereotypes for a delightful spectacle.

7:33 – Rodney includes a joke about tricking himself to go to the gym by exercising behind a “voluptuous woman”.

Johnny Beehner’s gig on marriage and kids titled “Hippie Wife Hippie Life” has to take the number one slot for me.

Johnny explains what it is like living with a hippie wife who takes health very seriously. I happen to live in a similar environment, and perhaps some personal bias had spilt into this one.

8:55 – Johnny tells a joke about schoolyard bullies that involve his genitalia.

9:17 – Johnny tells a joke involving the last name of his wife that rhymes with female genitalia.

There You Have It

If you think I’m wrong in the order or that I missed a diamond in the ruff, let everyone know in the comments below!