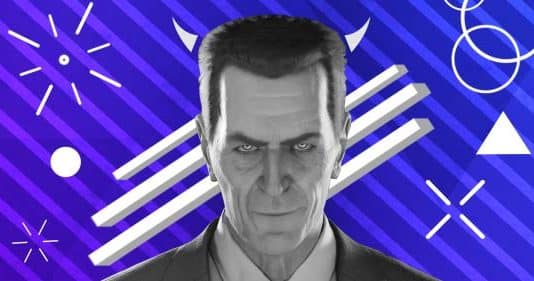 NOTE: This article includes spoilers to the Half-Life video game series including Alyx.

There are many similarities between Lucifer and the characteristics of the G-man from the Half-Life video game series.

In the Bible, Lucifer is described as the god of this world (2 Corinthians 4:4), prince of the power of the air (Ephesians 2:2), the father of lies (John 8:44), the serpent that tempted Eve, the one who weakens the nations (Isaiah 14:12), and the one who promotes rebellion against God through occult practices, and the ruler of demons (Matthew 9:34). By deception, he tricks many to follow him and his fallen angelic hosts into eternal torment (Matthew 25:41).

By examining the Half-Life franchise it becomes clear that the G-man is indeed Lucifer and that Gordon Freeman has cut a deal with the devil.

The story of the Half-Life universe can largely be attributed to scene fiction and horror writer Marc Laidlaw, who used to work for Valve as the lead writer of the project and was brought back in for the latest Half-Life VR installment Alyx as a consultant.

Marc Laidlaw’s book the 37th Mandala is featured in Gordon Freeman’s locker at the beginning of the first game:

This book opens with a quote from Georg Von Rutter’s Secrets of Gnostic Numerology which references real occult practitioners John Dee and Aleister Crowley, stating that their understanding of the number 37:

“…resonates to a transcendent dimension of enforced stability, as if appointed to keep chaos at bay”.

The plot of the book features a protagonist who interfaces with demons; summoning forces he cannot control.

Likewise, Gordon Freeman summons the creatures of Xen by opening a portal with the aid of the G-man (See Daniel 8:10-27), which attracts the attention of the Combine, leading to their universal rule of planet earth.

The G-Man Is Transcendent

Defying space and time, the G-man is often seen walking into areas (when explored) that have no exit. His ability to materialize in hard-to-reach places while following Gordon on his hazardous journeys, only to disappear, is evidence of his transcendent nature.

Such characteristics are recorded in the Gospel accounts with regards to Jesus’ glorified, or post-resurrection, state:

“A week later his disciples were in the house again, and Thomas was with them. Though the doors were locked, Jesus came and stood among them and said, ‘Peace be with you!'” -John 20:26

“Now it came to pass, as He sat at the table with them, that He took bread, blessed and broke it, and gave it to them. Then their eyes were opened and they knew Him; and He vanished from their sight.” -Luke 24:30-31

In Biblical terminology, this would mean that the G-man is a spiritual being who can materialize in human form (Genesis 19:1, Hebrews 13:2).

The G-Man Is Accountable To A Superior

The G-man is not a lone actor, he submits to the will of his employers who have to give him authority to meddle with or intervene in the world.

“That’s why I’m here, Mr. Freeman. I have recommended your services to my employers, and they have authorized me to offer you a job. They agree with me that you have limitless potential.” G-Man, Outro Speech, Half-Life

“Some believe the fate of our worlds is inflexible. My employers disagree. They authorize me to… nudge things in a particular direction from time to time.” G-Man, Ending Speech, Half-Life: Alyx

Likewise the book of Job records that Lucifer is subject to the authority of God and cannot enact his desires on humanity without the sovereign permission of God first:

“So Satan answered the Lord and said, ‘Skin for skin! Yes, all that a man has he will give for his life. But stretch out Your hand now, and touch his bone and his flesh, and he will surely curse You to Your face!’ And the Lord said to Satan, ‘Behold, he is in your hand, but spare his life.’” – Job 2:4-6

It is also worth noting that the plurality of the G-man’s employers could be a reference to the Trinitarian nature of God. The word translated “God” in Genesis 1:1, Elohim, is a plural term.

The beginning of Half-Life opens with the G-man partially quoting Isaiah 60:1 and referencing John 2:4:

“Rise and shine, Mr. Freeman. Rise and shine. Not that I wish to imply you have been sleeping on the job. No one is more deserving of a rest. And all the effort in the world would have gone to waste until…well, let’s just say your hour has come again.” -G-man, Half-Life 2, Opening Speech

A definite characteristic of the G-man is the frequency with which he offers ultimatums as conditions of employment. He cuts deals with individuals without context that are, by nature, deceptive- deals that no doubt serve his own ends and not those who are participating.

“You’ve proved yourself a decisive man, so I don’t expect you’ll have any trouble deciding what to do. If you’re interested, just step into the portal and I will take that as a yes.” -G-man, Half-Life outro speech

“Perhaps what I am is not as important as what I can offer you in exchange for coming all this way. “ -G-man, outro speech Half-Life Alyx

The result of partnering with the G-man at the end of Half-Life 2? Slavery:

“Rather than offer you the illusion of free choice, I will take the liberty of choosing for you…if and when your time comes around again. “ -G-man, Half-Life 2, Outro speech

The devil offered Jesus all the kingdoms of the world if He would bow down and worship him (Matthew 4:8-10), and he deceived Eve in the Garden of Eden by stipulating misleading propositions (Genesis 3:4-5). The devil’s promises are always wrapped in deception, never involve grace (unmerited favor), and must always be earned through personal effort.

The G-Man Is Bound & Released

The last book in the Bible, the Apocalypse, describes the revealing and return of Jesus who enters space-time through a portal (Revelation 6:14-17, 19:11-16) and destroys all governments, climactically sitting as King of the world from Jerusalem while the devil is bound for 1000 years to no longer deceive the nations (Revelation 20:1-3). This period of time is known as the Millenium and is spoken in detail throughout the Bible (Isaiah 65, Ezekiel 40-48, Zechariah 14, Zephaniah 3). It is described as a time of rest, prosperity, technological development, and prolonged lifespan.

After 1000 years the devil is temporarily released to once again deceive the nations for a final afront on God, which results in Lucifer and all his accomplices being condemned to the lake of fire for eternity (Revelation 20:7-10).

Half-Life 2 shares many similarities with the Biblical Millennium, however, it inverts its virtues, making God humanity’s oppressor instead of Lucifer.

Half-Life is set at a time in human history when the world governments, led by the United Nations, failed to stop the invasion of the Combine, which entered the world through portals that took control of the world in what is called the Seven Hour War.

The Combine elects Wallace Breen who acts as a mediator between the combine and enslaved earth (Jesus).

The Combine sterilize all humans through a “suppression field”, controls their minds by poisoning the water supply, and merges humanity with themselves through genetic and mechanical modification (characteristics of Lucifer’s global government before Christ’s return, see Daniel 2:43-44).

At the end of the latest installment of the Half-Life series Alyx, the G-Man is released from a hyperdimensional prison at which he is being held:

When placing the events of Half-Life 2 on a Biblical timeline, all these events suggest that the game is set at the end of the Millennium.

Freeman is an anti-christ, in that he stands in place of Christ as a false alternative. He is described by Breen as a messianic figure who is “The One Free-man” and “Opener of The Way” (John 14:6).

If this line of thought is followed from the Bible, then we know that Half-Life 3 will likely involve a Gog & Magog rebellion as described at the end of the Millenium in Revelation 20:7-10.

There is a strong inductive argument that will allow us to assume that Gordon Freeman, with the assistance of the G-Man, will overthrow the Combine’s presence on earth.

Much like ancient gnostic thought, which is quoted in the 37th Mandalas from Gordon’s locker, God is presented as evil (the Combine) while the devil (the G-man & Gordon Freeman) is presented as earth’s liberators.

In reality, it is human rule led by Lucifer (Daniel 7) that will lead to existence much like that which is described in the Half-Life series via the Combine’s universal oppression. Only God’s supernatural intervention brings liberty, justice, and peace to earth through the return and rule of Jesus Christ.

Freeman unknowingly does a deal with the devil just like many today are living their lives without knowing that they have, in fact, pledged allegiance to Lucifer and are accomplishing his will on the earth.

The creator of Half-Life and Valve studios Gabe Newell is fascinated with brain network interfacing and is pushing for the same transhuman capabilities that the Combine themselves are subjecting humans to within the Half-Life universe.

Will the most anticipated video game sequel of all of history, Half-Life 3, be finally released on a technological platform that will give players a full-body experience? One that will require the permanent merging with BCI tech to access?

Could such technology be used for the enslavement of the human race before Christ’s return as people seek death while death flees from them? (Revelation 9:6)

Perhaps the warning of the G-man that leads to the opening of a portal to Xen at Black Mesa, “Prepare for unforeseen consequences”, has greater meaning outside of the Half-Life franchise.

Are you prepared for the revealing of the unseen King?

In a recent interview, one of the lead writers of Half Life: Alyx, Erik Wolpaw, states that the G-Man is indeed Satan:

“You kind of let Satan, or god, or whatever you want to call him, out of prison. Like you do a big favor for Satan, what does he give you in return?”

The Gog & Magog predictive plot of Half-Life 3 or Episode 3 is affirmed by Marc Laidlaw’s blog post “Epistle 3” which outlines the discovery of a superweapon – The Borealis.

The Borealis contains advanced portal technology from an Aperture Science secret project that was activated once the 7-hour war commenced (Armageddon – Revelation 16:12-16). This flung the ship between dimensions, fazng in and out of reality at Antarctica.

The Borealis is boarded by Gordon Freeman (Gertie Fremont) and Alyx Vance (Alex Vaunt), set to self-destruct, and pointed to the invasion nexus of the combine (throne room of God).

Lucifer (G-Man / Mrs. X) proceeds to rescue Alyx from the suicide mission while leaving Gordon to die, demonstrating that Freeman was a pawn in Lucifer’s goal of killing God.

Hi Nick, thanks for pointing this out! I had not come across this. The video was cut out of the game, so it’s not official canon, however does provide some interesting insights from the developer’s perspective.  To understand the point… Read more »