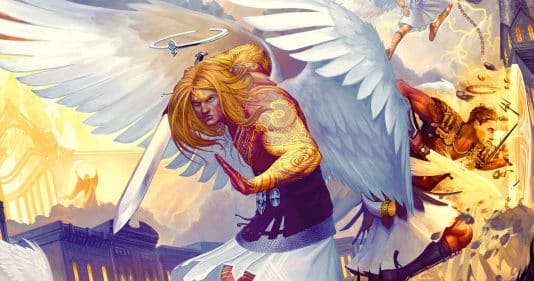 Deliverance Board Game Review: Every Theology Nerd Needs This Game!

Deliverance is a heavy tactical cooperative dungeon crawler board game with a prominent Biblical theme of angels vs. demons. With beautiful artwork and well-thought-out game mechanics, Deliverance is going to delight its target audience. However, it will most likely be avoided by unbelievers due to their prejudice of Christ while dissatisfying the massive casual Christian gaming market who will not appreciate its strategical complexity.

Having hosted multiple games of Deliverance on Tabletop Simulator through the vibrant Deliverance Discord Community, and having played the game with the game developer Andrew Lowen himself, there are several recurring characteristics I experienced:

You really do feel like a mighty angel smiting demotic foes while having many choices of fully customizing your playstyle and strategy.

There is also a story-driven campaign and solo mode that I have never played.

You are an elite angel warrior sent to battle demons and send them to the abyss to await final judgment. Your mission: deliver the demonically oppressed saints from evil in a small town called Fallbrook.

Creative license has been taken with Deliverance with the inclusion of female angels and depictions of angels with feathery wings. Both of these concepts are not found in the scriptures.

The demons look menacing without being horrific and would not frighten children.

The damage system works by adding damage to demons instead of removing health points. I found this system particularly counterintuitive.

For example, to work out how much damage I must inflict to defeat a demon there requires several steps:

I started using the damage tokens as health points instead, which simply required subtracting my damage until 0 is achieved. When doing this, I found the whole process a lot smoother, which gave me more time to make meaningful decisions instead of doing calculus.

In an interview with us, the developer Andrew Lowen explains why he chose to include female angels. Personally, I’m not too fond of the inclusion of them, and it does pull me out of the theme due to its stark Biblical inaccuracy. I would love to see male alternatives to the current female angels as an expansion down the road.

“The angels of Deliverance represent an allegory for how a person should fight spiritual warfare, which is the primary reason why the angels were represented as male and female. Though there is no solid support for female angels in the Bible (or even angels with 2 wings for that matter), our decision to include them in Deliverance comes from our view that women should also be represented as able to put on the Armor of God and wage spiritual warfare, too!”

Once the initial round of demons is defeated in a skirmish game, more are spawned with a random boss or principality encounter.

The idea of again cleaning “trash mobs” to fight the boss makes the game long. I would rather start the game with trash mobs and the boss on board while having heavenly treasure (Armour) and talent trees unlocked. Alternatively, I’d play a game with no trash mobs in the final encounter with the boss having greater health/damage output to accommodate the missing trash.

I will most likely tweak the boss encounters to my liking while giving them the ability to summon more demons into the battle if not interrupted.

With some tweaking to the damage system, removing female angels, and individualizing boss encounters, I see Deliverance taking a prominent position on my board game shelf and making its way to my favorite board game!

Deliverance gets the TheoNerds seal of approval, and I foresee it being on every Theology Nerd’s shelf.

This game is going to reach a lot of people and I can’t wait to use it as an outreach tool in local board game shops / with non-christian friends!

What are your thoughts? Leave your review of Deliverance below!