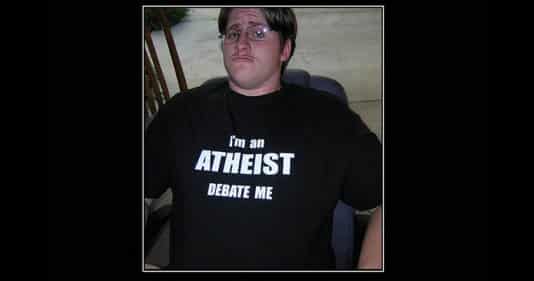 Pwn Atheism: How To Define Atheism – Is Atheism A Worldview?

Atheists seem to be fond of saying “Atheism is not a worldview”. Christians should have the humility to admit when they have made a mistake and also recognise that we are not beyond correction, even from militant atheists, however, let’s explore and highlight the true nature of this objection.

Many atheists claim that their atheism is a “lack of belief in a god/gods”. You will often hear them say, “I just believe in one less god than you”. This might very well be how that individual defines the term and is something you should clarify when speaking with them, however, it is irrelevant how an individual defines a term. If you were to describe being a Christian as “always being right”, would not the atheist reject your personal definition of Christianity?

What is important is that we use terms by how they are actually defined. If atheism does mean “a lack of belief in god/gods”, then atheists would have to refer to themselves by everything they don’t believe in to be consistent. They would have to be a-santaclausists and a-toothfairiests, etc.

No, the philosophical and etymological meaning of atheism is “no God”. When someone says they are an atheist they are in fact saying “there is no God”. They might mean something else, but that is what the word atheist actually means.

What is a Worldview?

Believe it or not, the term “worldview” is a combination of two words- world and view.  #gasp

When atheists say atheism is not a worldview, they are saying atheists have no view of the world, which is certainly not true.

All atheist positions have this in common: the atheists themselves determine what is ultimately true, moral and rational. Atheism is the exaltation of self. Atheism is certainly a worldview.

Why Do Atheists Object To These Definitions?

The reason the atheist wants to define atheism as a simple “lack of belief in a god/gods” and deny they are operating within a defined atheistic worldview is because they don’t want to be put in a position where they have to justify their views. It is easy to defend a position that is not a position at all. It is easy to demand the Christian to do all the leg work as they sit back and critique your efforts from their untouchable ivory tower.

Atheists don’t want to admit to holding affirmative beliefs because as soon as they do the philosophy of atheism self explodes.

How To Pwn Atheism

Atheism is the easiest worldview and religion to pwn and can be done with one simple question. The question I am about to share with you was actually used against Jesus by the chief priests and scribes.

Some context: Jesus has just entered Jerusalem triumphantly on a donkey, fulfilling Daniel 9:25 to the day. He clears the temple of the money changers and heals the blind and lame (what a boss) Matthew 21:1-17.

It is after these things that the chief priest and elders became uber jealous because little kids were worshipping Jesus (v15-16) and they proceeded to question His right and authority to do these things.

The chief priest and elders were crafty men. They knew how to make people look foolish, and better yet, trap them with their own words so that they could bring accusations to kill them for blasphemy. You have to remember that when questioning Jesus here they are considering whether or not they should kill Him (v46).  This is the question they ask Jesus:

“By what authority are You doing these things? And who gave You this authority?” Matthew 21:23

This is the very question that confounds atheism because the professor of atheism has to say they have given themselves the ability to determine what is ultimately true, moral and rational. The problem is anyone can do that.

Atheists have determined that they need evidence from you and that they are going to be the ones that determine the validity of your claims. This is completely arbitrary as someone using the same standard of determining truth (themselves) could just as easily reject such a standard and replace it with one by which they simply flip a coin to validate truth claims, or kill people that disagree with them.

You can’t destroy atheism and you don’t need to. It is already destroyed.

The Religion of Atheism

You must realise that when the atheist asks you to prove God’s existence or the truth of the Bible, they are doing so from a position whereby they have exalted themselves to the position of deity. This request for evidence is in fact a request to be worshipped. “Bring your offering to me that I may determine if your sacrifice is acceptable in my sight” #EveryAthiestEver. Just like any pagan religion, if the sacrifice is accepted, the gods will give you what you desire. In the mind of the atheist, this is to accept your claims and embrace Christianity.

Do not discard the truth of God’s Word to worship at the altar of man. The scriptures plainly say that if one doesn’t receive the scriptures, then nothing will convince them (Luke 16:31). Let them reject the majesty of God’s Word and wallow in their ignorance. Paul the apostle did so with the Jews in Rome (Acts 28:23-29).

Why Atheists QQ So Much

When you stop grovelling at the whims of the atheist you will quickly expose the true motive of the one questioning you. You will see that their objection to Christianity is one that is emotional and not rational. Having a discussion with someone like this would be pointless in the first place even if one was to bow down to their arbitrary requests.

Atheists are angry that God allows a world where individuals can stub their toes and be recompensed for pursuing pleasurable sin. Atheists act like they are the only ones that suffer in life and have no concept of the sufferings of Christ or true Christians. Their objections to Christianity are merely complaints.

My advice is that if someone is quibbling over the definition of atheism and denying that it is in fact a worldview this is a sure sign that this person is not reasonable or willing to have a constructive conversation. Focus your attention elsewhere where you can gently expose one’s love of sin and hatred of God and point them to the pearl that is the Word of Life.

For those radical angry atheists who revile you, pray for them. Remember God does not need you in order to draw them to Himself and there are none who seek after God (Romans 3:11).

Ah – I meant to put this here, but your site will autoscroll to the next post rather than allowing the reader to open a new page… Not the best design, but to each their own, and it actually is… Read more »

Atheists want to say that they don’t have a worldview so they can put the burden of proof on those they revile, while never justifying their own presuppositions. I’ve talked to enough atheists to know that the phenomenon is psychological… Read more »