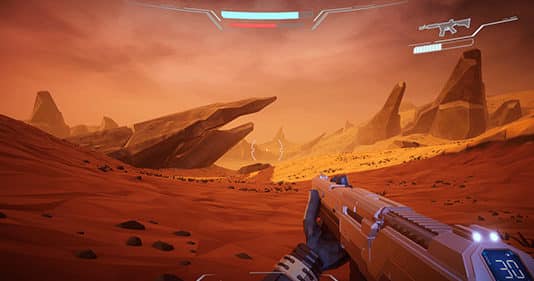 Unlike many Christian content creators these days who lack a clear statement of belief or appear hesitant to share their doctrine, Revelation Games stands out by listing a statement of faith listed on their website.

“Everyone has a worldview that informs the way they think, and inspires their creativity. At Revelation Games we’re no different. We have been inspired through our faith in Jesus Christ and the Bible from all the rich stories, characters and truth. “(Source)

An incoming distress signal from an ancient planet called Eden has led you to investigate Facility 206. Upon entering the planet’s atmosphere, you are mysteriously shot down and have to survive on this hostile planet while trying to reestablish communication with the outside world.

“I think what makes it unique first and foremost will be the story, the fact that it’s not a craft your base sci-fi survival clone of many other games. There are missions, meaning, purpose in the framework of the experience. Even a small handful of characters to meet along the way.”

The ambitious project seeks to combine thrilling FPS action with story depth that will leave a subtle yet meaningful Biblical imprint on people.

Make sure to sign up for email updates here to follow the developments of Eden Remains: Arrival.