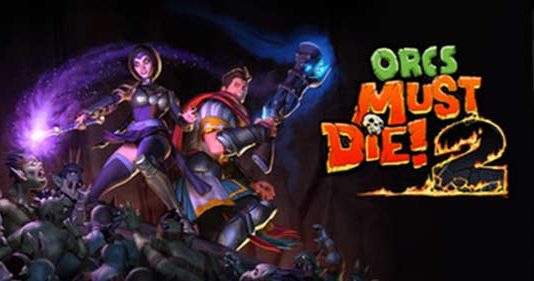 Thinking of a tower defence action game with a cartoon style RPG spin? Then you have to check out Orcs Must Die 2.

With hours of enjoyable gameplay and little-to-no commitment, weapons and traps to be unlocked to suit your particular play style and plenty of difficulty levels to match your progression, this game is incredibly fun.

It’s great to play single player, or when playing locally with friends; however, you will need two systems and two copies of the game to do so.

Orcs Must Die 2 is my go-to co-op game when playing video games with my wife. We have enjoyed many hours together, killing the hordes that pass through the portals to meet their timely demise! The ability to pick up and play for an hour, get some enjoyment and then put it down is very appealing, especially when you’re exhausted from caring for small children.

There are many mods in the Steam community to tweak weapons and traps (such as adding frost or increased damage effects); however, I have not experimented with these myself.

The testing of weapon, trap and trinket combinations can be very rewarding and adds enormous replay value to the game.

There is plenty of content to sink your teeth into with a story mode, classic mode and endless mode, alongside three difficulty settings and several maps of various sizes and challenges. DLC expansions are available once the original game’s content is exhausted and there are weekly challenges too.

Weapons, traps and trinkets are awarded to players upon completing story mode rounds. These items can be used in other game modes—successful missions award points or “Skulls” that strengthen items. The game’s story is mostly delivered through voice-over during the set-up phase in the story mode. The story can be easily missed when concentrating on set up or if playing while the audio is muted. Cutscenes are skippable too.

The Order, a group of War Mages, maintain portals called rifts that allow magic to work in the world but also open a gateway for the hoards of orcs, trolls, ogres and dragons entering from the Dead Lands.

Magic is used in the world for public services such as healing ailments and bringing in rains for harvest. At the ending of Orcs Must Die 1, the player closed all the rifts to defend the world from the hordes of the Dead Lands. Afterwards, however, the world plunged into famine and sorrows as the population had become dependent on the magic the Order used for public services.

The last master War Mage opened a small portal to connect his most exceptional apprentice the Sorceress with his worst apprentice, the War Mage.

Portals have begun to open again in the world, and the War Mage and Sorceress must work together to continue the battle against the unrelenting hoards!

The game includes banter between the War Mage and the Sorceress, some is inappropriate. The ending features strong themes of forgiveness and redemption.

Orcs are displaced in various ways including with fire, acid, explosions, brute force, grinders and other means. The gore can be reduced in the game settings.

There is one trap that converts enemies into allies via magic mushrooms.

It is worth noting that Freemasonry is also known as The Order. Some of the garbs of the War Mages seem to be influenced by the Knight Templers. There are no explicit references to Freemasonry in the game, however.

Unfortunately the female playable character the Sorceress is not dressed modestly and is heavily sexualised. As a result, my wife and I both play the male War Mage in co-op.

The story mode contains elements of inappropriate dark humour such as the War Mage smirking at the vanquishing of his older master (Leviticus 19:32). There are also various remarks throughout the game from the War Mage about the appearance of the Sorceress. As a result, I cannot recommend this game for younger audiences.

The sexualisation of female characters seems to have been rectified, however, in the third instalment which is available on Stadia:

We all desire a world free of sorrows and ailments. The Orcs Must Die franchise highlights that there is something spiritually wrong with this world. Christians take courage, knowing Jesus will one day return through a hyperdimensional portal and right all the world’s wrongs (Revelation 19:11-16).