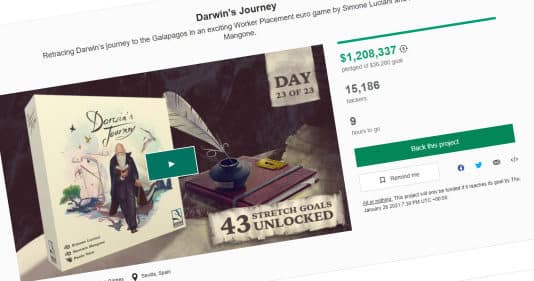 Ironically, Kickstarter has branded their website with a #BlackLivesMatter insignia while hosting a game about a well-documented racist: Charles Darwin.

Darwin’s Journey, a board game that sets players upon the HMS Beagle towards the Galapagos to “contribute to the human knowledge of biology“ by collecting items for museums, has gained over $1,000,000 through the crowdfunding platform Kickstarter.

Darwin Was A Racist

Many are unfamiliar with the full title of The Origin of Species, which references his racist and colonial leanings: On the Origin of Species by Means of Natural Selection, or the Preservation of Favoured Races in the Struggle for Life.

These “favoured races” referred to white Europeans, as opposed to the “darker savages” from the distant colonies of Britannia.

Darwin’s subsequent book The Decent of Man has open and explicit calls for the eradication of the “Negro” and “Australian” (Aboriginal), comparing them to baboons or gorillas when contrasted against the “Caucasian”:

“At some future period, not very distant as measured by centuries, the civilised races of man will almost certainly exterminate, and replace, the savage races throughout the world. At the same time the anthropomorphous apes…will no doubt be exterminated. The break between man and his nearest allies will then be wider, for it will intervene between man in a more civilized state, as we may hope, even than the Caucasian, and some ape as low as a baboon, instead of as now between the negro or Australian and the gorilla.“ -Charles Darwin, The Descent of Man

It was such sentiments as these which lead to the mass murder of many of the Aboriginal people by Europeans, who saw them as “living missing links” in evolutionary biology.

Their body parts, including the skulls, brains and skin, were placed on display in museums for European naturalists to examine. A New South Wales missionary witnessed the butchering of Aboriginal men, woman and children by police. Forty-five heads were boiled down to remove the flesh and 10 skulls were selected to be shipped to Germany for Amalie Dietrich, the naturalist “Angel of Black Death” who embraced Darwinian Evolution. (Source)

It is a tragedy that Darwin’s false belief about human anthropology was used to justify barbarism, and sadder still is the fact that this evil ideology is ignorantly promoted today as one that cherishes black lives.

The vain plea for the justice of black lives expressed by Kickstarter is undermined through the promotion of a board game that glorifies a racist. However, this is not the first public revelation of their hypocrisy.

In 2014 Kickstarter refused a project that documented the crimes of Kermit Gosnell, a serial baby murderer, stipulating that the accurate description of his behaviour against black babies was a violation of their community guidelines. (Source)

Not only are Darwin’s writings racist, their logical inconsistency and arbitrariness is both philosophically and theological demonstrable.

In what has famously been coined “Darwin’s Horrid Doubt”, he expressed epistemological uncertainty towards what evolutionary assumptions place on human cognition:

“But then with me the horrid doubt always arises whether the convictions of man’s mind, which has been developed from the mind of the lower animals, are of any value or at all trustworthy. Would any one trust in the convictions of a monkey’s mind, if there are any convictions in such a mind?“ –Charles Darwin to W. Graham, July 3, 1881

Since the mind, in Darwin’s explanation, is a result of natural and godless processes, there is therefore no reason to believe that human faculties are operational or trustworthy.

Furthermore, when the reality that humans are made in the image of God is stripped from our ontology, there remains two persistent logical problems in evolutionary assumptions about humanity:

Evolutionary Assumption #1 – The ontological demotion of humans to animals.

If one were to consistently adopt Darwin’s views, then people should have no problem consuming human meat (cannibalism) as they do any other animal meat.

Evolutionary Assumption #2 – The ontological exaltation of animals to humans.

If this is to be assumed, there should be no qualms with bestiality, as humans are just another mammal.

In truth, we are all created Imago Dei (in the Image of God) and stand unique amongst God’s creation. We are all of one family and are distantly related, having come from “one blood” (Acts 17:24-26), the linage of the man Adam (1 Corinthians 15:20-22).

This is why the command to love your neighbour as yourself is assumed to be a global decree that crosses tribes, nations and languages. This is why the Son of Man can redeem the sons of Adam.

The Polish tabletop crowdfunding site Gamefound gets our recommendation, as through its current lack of such blatant hypocrisy, it is proving to be a suitable replacement for Wokestarter.

Deliverance: Every Theology Nerd Needs This Board Game On Their Shelf