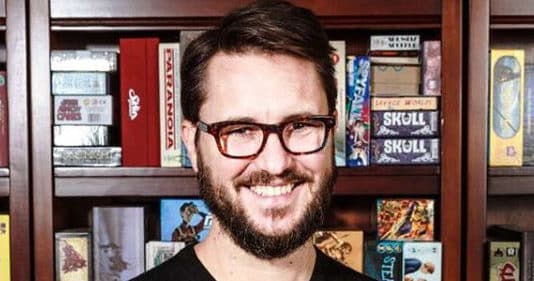 Most geeks would be familiar with Wil Wheaton from his early days on Star Trek, his appearance on Felicia Day’s “The Guild”, cameos on “The Big Bang Theory”, and Geek and Sundry’s web series “TableTop”. Wil is also known in the mental health community for being vocal about his struggles with depression, anxiety, insomnia and suicidal thoughts.

On paper, Wil’s struggles with his mental health seems surprising. Here is a man who seems to have it all- a house, a beautiful wife, children that love him and a non-conventional and satisfying job. He has celebrity status and is a successful self-published author, writing autobiographical books such as ‘Just A Geek’ and ‘Dancing Barefoot’.

This disconnect between his life and his mental health is something that Wil even wonders at:

“My life is, by every objective measurement, very very good. And in spite of all of that, I struggle every day with my self esteem, my self worth, and my value not only as an actor and writer, but as a human being.“ (Source)

While we can’t see directly into a man’s heart, it gives us great comfort to know that the Bible is not silent about these issues. Let us then examine what Wil has revealed about his mental health. Perhaps you can relate to his struggles and will find comfort here.

Wil has spoken about how his acting career was one that was forced on him by his mother who wanted to live vicariously through his success. Growing up, Wil’s relationship with his allegedly emotionally abusive father was fragmented. His father was harsh, and even as a child Wil and his father worked long hours and so they were like passing ships (7:50).

Wil describes this time in his life as one during which he wished he could escape. He recently has described that by the age of 13-14 he was counting down the time to get away from his parents (24:00).

It is only in recent years that Wil has severed communication with his parents upon deeper reflection on his life-long relationship with them (16:20).

At the age of 18, after becoming disillusioned with his position on Star Trek, (Just A Geek, pg 225) Wil moved to Kansas. He worked with a start-up computer company promoting the “Video Toaster 4000” and after a year he moved back to LA and enrolled in drama school to resume his acting career. He even refused acting jobs to focus on developing his acting skills. However, after five years when Wil had graduated, Hollywood had forgotten about him (1:50).

In his book “Just a Geek”, Wil describes how this turbulent time of struggling to land acting gigs and persistent rejection greatly impacted his mental health (7:15).

In the midst of this, Wil created a website and started a blog to write about his life. Wil presented himself as being foul mouth, irreverent and crude so as to distance himself from the shadow of Wesly, the innocent little boy from Star Trek whom he has been typecast as.

Wil explains that he intentionally lied about, or “sugar coated”, his experience in landing jobs in order to present himself as being more successful than he really was. He is extremely candid in his book and blog through admitting to his lying and his struggles during this time, his insecurities and also describing the inner workings of his worldview and personal philosophy.

“I’m not a religious person, I’m not quite an atheist but I’m certainly not a theist. Friends describe me as an agnostic Daoist. I prefer to follow philosophies instead of leaders… if I had the patience I’d probably be a Buddhist”.  (Source)

Later in a podcast interview with Nerdist Wil does describe himself as an atheist (Nerdist” podcast on Feb. 22, 2011).

More recently, Wil explains that he believes true religion should inspire people to be kind, loving and selfless and should not promote:

“the hateful bigotry we so often see from people who claim religious faith as justification for their own absence of compassion and empathy.” (Source)

What is clear is that Wil is very self-aware and admits to his struggles with viewing his purpose in life being directly linked to his career. In an attempt to paint himself as finally reaching peace and happiness, he concludes his book “Just A Geek” by explaining his joy and purpose is not in a thriving hollywood acting career, but rather in being a writer, self-published author, father and a geek (6:40).

So how does Wil handle his depression, anxiety and other mental health issues? In three ways: therapy, medication and eastern meditation.

Wil practices “Mindfulness” on the Headspace app every day (00:54:00). Wil even led his viewers in a meditation session during a Twitch Livestream.

Wil also spends a great deal of time talking about gratitude. This is seen in a recent post of his describing the quality family time he has experienced during the Covid-19 lockdown:

“I’m intensely grateful that we all love and respect each other, that we’ve found ways to support each other, give each other space, and never stop loving each other through all of this.” (Source)

Wil can be viewed as a proponent within the geek community for secular humanism with a new age bend. The philosophy of secular humanism is a fantastic framework for those who desire life on their own terms and want to tear the chains of ultimate authority from themselves.

Wil attempts to paint this worldview as a sort of earthy freedom whereby believers “dance barefooted”, however those who follow him will only be left with an arbitrary, self-constructed and ultimately purposeless existence.

As seen from Wil’s experience, many who hold to this worldview are pulled into a religious system whereby their importance in this world is measured by the value and impact they can have on others, and so they must worship at the altar of men’s impressions.

The pressure and futility of holding to these beliefs so torments the mind that, much like Wil, many are drawn to the increasingly popular allures and distracting techniques of eastern mysticism and meditation to mask their despair, as with video games, television, the internet or even drugs and alcohol.

Christianity, on the other hand, states that good works have no impact on one’s ontology. In fact, humanity is so desperate that we need foreign and supernatural aid. Good works are a natural result of receiving the ultimate Good Work.

Wil’s condition will never be cured as long as he seeks to only address the symptoms of his anxieties instead of the cause of them. No amount of drugs, therapy or meditation will resolve this issue.

In his book, Wil described being unable to comfort his father when a family member died:

With a philosophy that states death has always existed and will always exist and that death is the most natural part of life, why was Wil left speechless in the face of death?

And in a world of mere matter in motion where one’s value is self-constructed and dependent on their works, why does Wil have a desire for unconditional love? (00:43:00)

In a world of “survival of the fittest” and chaos, a world in which Wil says:

“terrifies me every night of my life and I don’t know why or how to stop it.” (Source)

why would Wil have feelings of gratitude? Whom should he be thanking for the riches in his life?

Believe it or not, Wil thanks God:

“I’m not religious, but I can still say Thank God for Anne Wheaton. Thank God for her love and support. Thank God that my wife saw that I was hurting, and thank God she didn’t believe the lie that Depression is weakness, or something to be ashamed of. Thank God for Anne, because if she hadn’t had the strength to encourage me to seek professional help, I don’t know how much longer I would have been able to even exist, to say nothing of truly living.” (Source)

The good news for Wil and for others who struggle with mental health is that they would find peace through surrendering to the truth they are suppressing in unrighteousness and embracing the God who created them.

Wil Wheaton is more than just a geek, he is a husband, father and most importantly, an individual created in the image of God with transcendent and objective ontological value. He needs to recognise that his value as a human is not contingent on his success but on the one who gives him life, breath and all things.

Jesus said He is the way, the truth and the life, and that no one comes to the Father except through Him (John 14:6) and therefore the rejection of God is the rejection of purpose, truth and life itself. When one rejects the King of liberty you naturally become a subject of slavery.

Wil may dance barefooted for a season but in time he will realise that his feet are putrid and sore. There is hope in death, access to unconditional love and an avenue to express gratitude. It is not found in secular humanism and eastern philosophy but only in the reality of God, the revelation of His Son and the mercy extended to those who are unworthy of having their feet washed by Him who made them.

It takes someone with mental health issues to mock the religious beliefs of a group of churchgoers who were just killed in a mass murder at a their church. Totally sick, disgusting, and hypoctrticial of him.

ah you must mean this https://popculture.com/trending/news/wil-wheaton-texas-shooting-tweet-comments/

I feel for Wil I truly do. I stopped my life to take care of my sick grandparents and put my life on hold for about 20 years off and on. While i wouldnt give anything for the time I… Read more »

Yes, ultimately life is about God and His glory, not our personal fulfillment 🙂 We might be able to help you promote your book if it is a good fit!