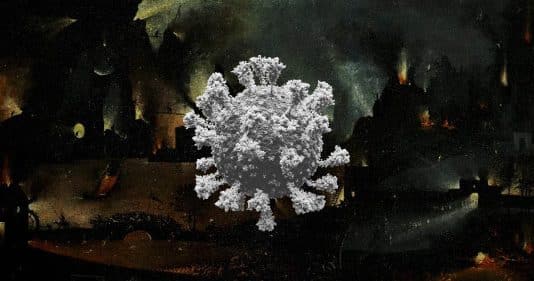 Due to pop culture, the word “apocalypse” likely evokes imagery of existential and universal threats to humanity such as zombies, comets, nuclear fallout, and aliens.

However, the word “apocalypse” is actually derived from the last book of the Bible, the Revelation of Jesus Christ. Apocalypse is the Greek word to uncover or reveal.

Another pop culture trait of the Apocalypse is the four horsemen who commence waves of universal judgment on the earth as described in Revelation chapter 6.

“I looked, and behold, a white horse. He who sat on it had a bow; and a crown was given to him, and he went out conquering and to conquer.” -Revelation 6:2

The coronavirus that brought about worldwide policy transformation in the wake of 2020 also saw the universal mandate to cease Christian worship which has never been seen in the 2000 years of Church history.

The word “corona” is Latin for “crown”- the coronavirus is the crown virus.

Interestingly enough, the first horseman of the Apocalypse, the white horse, is marked by characteristics of universal policy (or conquest) and is described as one wielding a crown and bow.

In the Latin Vulgate (medieval Latin translation of the Bible) this word is corona:

So we could therefore read this passage as: “He was given a corona, conquering and to conquer.”

White also symbolizes perfect righteousness throughout the Bible (Psalm 51:7). Has not the propaganda surrounding COVID-19 been shrouded in moral obligations that hide behind the seemingly benign interests of scientists and doctors who dawn white lab coats?

It is also apparent that the terrorist organization known as the World Economic Forum has been extensively involved in shaping government policy around the world regarding COVID-19 response and preparedness measures.

The World Economic Forum’s logo features a bow or an arc which is another characteristic of this white horseman.

The fact that a bow is mentioned, yet arrows are omitted, could be a reference to this conquest proceeding without violence. A military tactic of the coming man of sin is conquest through subterfuge (Daniel 11:21).

“When He opened the second seal, I heard the second living creature saying, “Come and see.” Another horse, fiery red, went out. And it was granted to the one who sat on it to take peace from the earth, and that people should kill one another; and there was given to him a great sword.” -Revelation 6:3-4

Next up is the red horse. The term red in this context can denote fire and with the characteristics of removing peace from the earth, riots seem to meet this description.

Has not the world seen its fair share of riots since the announcement of COVID-19?

From BLM activities that set cities across the USA on fire with “mostly peaceful” protesters to near societal collapse in South Africa as riots surrounding President Zuma engulfed the nation, mass looting and violence, trucker protests in Canada, farmer protests in the Netherlands and worldwide lockdown protests (most notably the Melbourne ones), not to mention the blocking of vital roads via the extension rebellion protests in the UK and now the most recent Brazillian protest with regards to presidential elections, it is clear the world is in a state of riot and violence after the announcement of COVID-19.

“When He opened the third seal, I heard the third living creature say, ‘Come and see.’ So I looked, and behold, a black horse, and he who sat on it had a pair of scales in his hand. And I heard a voice in the midst of the four living creatures saying, ‘A quart of wheat for a denarius, and three quarts of barley for a denarius; and do not harm the oil and the wine.'” -Revelation 6:5-6

What follows the red horse of the Apocalypse is the black horse which represents universal economic collapse and hyperinflation.

A denarius was a day’s wage, meaning that the price of basic necessities such as bread requires a day’s salary to purchase.

Universal lockdown measures were inevitably going to collapse the global economy which is already dubiously based on debt, the perfect catalyst to build back better and introduce a new economic paradigm:

The global push for electric vehicles and “green” energy, largely based on electric energy solutions, provide the perfect avenue through which to introduce a universal currency based on energy credits that can be distributed globally to obedient citizens.

While the war in Ukraine is offered as the face of the cause of the current inflation being experienced globally, this is clearly impossible should one think deeper than two inches on this issue.

“When He opened the fourth seal, I heard the voice of the fourth living creature saying, “Come and see.” So I looked, and behold, a pale horse. And the name of him who sat on it was Death, and Hades followed with him. And power was given to them over a fourth of the earth, to kill with sword, with hunger, with death, and by the beasts of the earth.” -Revelation 6:7-8

The final horse of the Apocalypse, the green (pale) horse, is marked by widespread death and disease.

Many food processing plants around the world have been destroyed, with billionaires such as Bill Gates buying up farmland at record speeds.

Could we see the rise of massive food and fuel shortages in the near future in the wake of rising costs?

Is it not possible that such shortages could cause many to starve? Could not the lack of fuel or electricity cause the spread of disease as people lack access to medical appliances or means to keep themselves clean through the supply of easily accessible water?

Characteristics Of The Last Days

The acclaimed painter Hieronymus Bosch depicts all human history in The Garden of Earthly Delights, the beginning of which shows Adam and Eve enjoying blissful communion with Christ in the Garden of Eden, followed by the Middle Ages in which sensual pleasures and an insatiable desire for exploration overtakes the world. The final depiction of humanity at the end of days is marked by darkness, riots, and the complete societal embrace of demons. The most telling of which is the depiction of an ear with a knife that represents an unwillingness to listen to or embrace the truth.

Mr. Bosch even left a musical Easter egg penned on the backside of a poor soul who is being tormented by an evil spirit, the tune of which potentially marks current events:

The Bible describes the last days as being marked by:

However, it’s not all doom and gloom.

The Bible notes mass spiritual renewal for the nation of Israel and their national acknowledgment that Jesus is indeed King of the Jews (Hosea 5:15, Hosea 6:1-3, Romans 11:25-27). This is a phenomenon we are already seeing!

The official national acceptance of Jesus by the nation of Israel is followed by the destruction of this global government at Christ’s return and the establishment of His universal Kingdom and reign from Jerusalem.

How To Prepare For The Apocalypse

Interestingly enough, there are no commands in the scripture to stockpile, retreat from society, or develop alternative economies when these signs are seen. Instead, Jesus commands His followers to look up, and expect His supernatural deliverance from these evils (Luke 21:28). Christians are also commanded to not forsake gathering as they see these evil days develop (Hebrews 10:25).

The recent events surrounding COVID-19 demonstrate what the world looks like without God. It’s dystopian. The embrace of secular humanism is what got us here and its ideals of enlightenment will not be able to turn the tide of these events.

Only God can save you from what is coming.

Nevertheless, the principles of 2 Chronicles 7:14 ring true for our days and is something you should consider:

“If My people who are called by My name will humble themselves, and pray and seek My face, and turn from their wicked ways, then I will hear from heaven, and will forgive their sin and heal their land. “

What do you think? Has COVID-19 marked the beginning of the final chapter of human history before Christ returns? Let everyone know your thoughts in the comments below!

Also, the verse for the “Green Horse” you reference only says “pale horse,” and you don’t explain why you call it green. The NAS says “ashen horse,” which is the Greek word chloros. It means “green” or “yellowish pale.” Just to clarify for your readers.

Good points 🙂 I’ll switch that out for 2 Timothy 3:1-5 as I should have mentioned that!

Also, I’ll take note to add a point about Chloros, I took for granted that people might not be as familiar with the original text!

To me it seems to be more and more obvious that we are entering the time of Revlations chapter 6. Even though im sure christians during hitlers reign were convinced that they were in the end times their were many other things that had not taken place such as israel becoming a nation after the 2nd world war and the new world order wasn’t being
Established like now. One thing I can confirm is that we need to be faithful to Jesus and not be like the virgins who had hardened their hearts and werent prepared. They didn’t have their oil jars full. We are to look up and encourage one another of Christ return. A very goid article

Oh my goodness. This is nonsense and a complete misunderstanding of the book, one that is highly and obscurely symbolic that changes to meet every time and place. It refers, as is agreed by most competent scholars, to the Roman Empire of the Biblical times

Is Jesus’ return literal or symbolic?