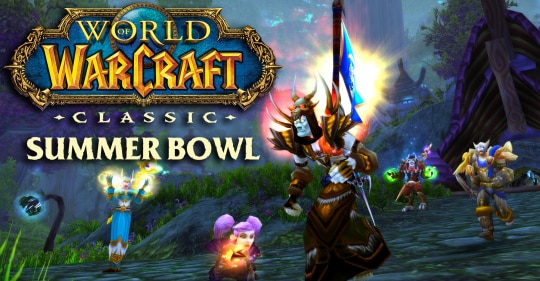 Blizzard has launched their new eSports initiative the World of Warcraft (WoW) Classic Summer Bowl, a 10v10 capture the flag Warsong Gulch Battleground tournament with a tiny cash prize pool of only $300 per player for the winning team. Blizzard is clearly testing the waters to determine whether this will be a successful eSports event and to also iron out any unforeseen problems before committing to greater prize pools.

These wargames (as they are called) are not being run on dedicated tournament servers but rather allows players to use their own “live” characters in the games. Items such as the “Free Action Potion” which allows players to move freely without interruption, engineering items that grant players additional damage and utility and transmoraphacations that change the appearance of characters (Noggenfogger Elixir), alongside extremely powerful legendary weapons such as Thunderfury, are all allowed. Such practices are usually forbidden in conventional WoW eSports tournaments.

While Blizzard’s attempts to revive the WoW eSports scene is an admirable ambition, World of Warcraft can never work as a legitimate eSport and here is why:

If one were to compare competitive World of Warcraft eSports with a legitimate professional sport like tennis we can see massive shortcomings at the very foundation of WoW.

There is a great deal of probability that the popularity of tennis is not going to die and that the rules of the game will not suddenly change. This allows tennis players to focus on developing their skills and strategies with confidence. This also assures sponsors that there is a greater likelihood of a return on their investment due to the stability of the sport.

World of Warcraft, however, is in a constant flux with players  having to adapt play styles and strategies to continual game modifications. Viewers who are accustomed to a particular WoW expansion become completely lost with dramatic game changes too.

To continue the tennis comparison, imagine watching a 10v10 sided game of tennis. There would be chaos and confusion. It would be difficult to tell who is winning and appreciate the nuanced skills and subtle decisions of individual players. Spectating the event would be frustrating and unpleasant.

This is what watching WoW eSports is like- both arena and their newer Summer Super Bowl Wargame format. Often the commentators (casters) are talking about things the viewers are not currently viewing because the camera operator has so many players to follow.

Added with the lack of UI information (in the wargame setup) or overload of UI information (in traditional arena games), it is often difficult to determine who is who and which class a player is even playing. In short, WoW eSports is a horrible spectator experience. This means it will never rise as a legitimate eSport because without eyeballs, the whole system falls apart. Add to this the dying player base, World of Warcraft is falling into consumer irrelevance.

It would be safe to suggest that in World of Warcraft, often the most skilled players do not come on top but rather those who have exploited game mechanics. Here is an example of Reckful, arguably one of the most skilled WoW players, lamenting the loss of a top tear team during BlizzCon 2010 due to a game technicality (profanity warning).

Or how about this 30min Wargame of players playing a super defensive strategy called “turtling” because it is the most advantageous way of securing a win.

A process of “sniping” (profanity warning) can be used by top arena players at the detriment of others when seeking to compete. This is where a top team (rank 1) would use a second arena team with different characters at a much lower rating to slow or stop the progression of their competitors climbing the ladder. This process secures their original area team on the rank 1 spot.

Even if one were to somehow create a legitimate career from World of Warcraft through reforms in the game or leveraging some type of fame generated from their successes and then invest the income generated from these ventures in creating passive income and retire early, ultimately, they would still die like the pauper and take nothing with them to the grave. (Job 1:21, 1 Timothy 6:7)

This is why Jesus commands His followers to be wise and invest their energies in assets that do not fade away and cannot be taken from them (Matthew 6:19-21). The call of Christians is to seek first the Kingdom of God and righteousness while avoiding frivolity (Matthew 6:31-33, Proverbs 12:11).

So before considering an eSport career one should count the cost of gaining the whole world but lose their soul (Matthew 16:25-27).